Priests have drank wine in front of me since I was a baby.

When I needed a tooth pulled, dad numbed my gums with whiskey.

My dad taught me how to refresh his 7&7 when I was not much older than seven. This was during my parents wild “card” parties where couples came over and played a game I will never understand or or expect anyone to pronounce correctly: Pinochle. It’s PEEEEE-knuckle.

My older sister got drunk and puked right in front of me when I was about 12. This wasn’t a habit of hers, just a teen thing, but I do remember it.Vividly. That is a sound you just don’t forget.

My family grew up with a second refrigerator, in the basement. Now when I look back, I don’t think that all families had two fridges back then, the way everyone does now.

It was, in fact, a beer fridge, though mostly for storage. It really wasn’t used as a “we-have-to-have-a-second-fridge-because-we-go-through-so-much-beer-and-also-maybe-we-should-think-about-inventing-a way-to-tap-a-pony-keg-through-the-door!” sort of fridge. Actually I think we just had it because we had six kids and my mom’s brain curdled trying to figure out how to store normal food, plus all those frozen waffles and Swiss steaks, and cookie dough.

I actually came of age in the era of Bartles and Jaymes. These were not the alco-pops of nowadays, but they WERE the ancestor. Fortunately for young livers everywhere, they tasted like pure ass. I drank one. Exactly one. Then went back to Boone’s Farm. 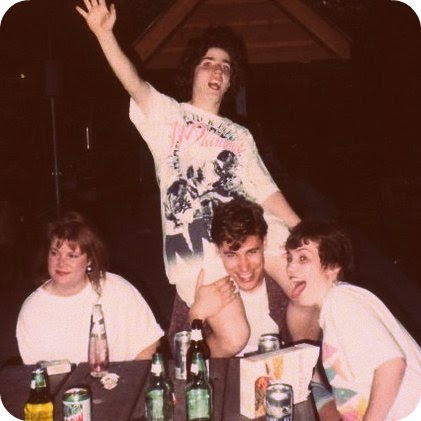 By the time I made it to college, on my own, you can imagine how it all went down. That’s right.

Nah. I mean, at parties I have one now and then. A beer or three.

But I had a problem.

I was already a rowdy, inappropriate idiot WITHOUT alcohol. If I drank, I’d just end up tired and staring off to the right.

Besides, I was Pretty Well Certain (as all young people are) that everyone was highly amused by my Antics.

Now I can see (by both deep personal reflection and also examination of this photo) that probably only about 66.6 percent of the people were. At least one-third of the people were probably annoyed or unimpressed. Or maybe they were just kinda tired from drinking three wine coolers.

Fortunately I was smart enough to save up my really hard drinking days for when I was older, and legal-er and for after I met the “appropriate” people to drink with.

Most of those people were ALL of the people I drank with in The Warrington Hotel in London, including my alcohol-drinking training coach, Frances, who once, in the same weekend, hung out with Bobby Flay and also passed out in the gravel underneath an SUV in a parking lot. The two incidences are not related.

It was during that time that I actually fell down drunk. I was walking home from the pub and just fell. On the ground. No I didn’t trip. I was just walking along in my happy, post-pub jolly land and BOOM. Hello ground.

I have to admit: I sort of feel like I’ve checked something off my bucket list that I would never have thought to put on it.

Now I mostly only drink to relax, which since leaving London means one and done. And since I am a parent, I can feel the need to relax at any time of the day or night. So my latest skill is “flexible” drinker. I can also swing as well: from beer to wine to whiskey (thanks Dad!) to margaritas  though preferably not on the same afternoon.

Regardless, I still just prefer to be inappropriate, without having to rely on alcohol. It seems so much more sensible.

Thanks to the ladies from The Scintilla Project for today’s prompt: