One blue day isn’t just that.

It’s the culmination of hours, days, weeks, holding on, fingernails biting into that last saving grain of wood. Fine, fine!. I laugh, I am fine. I am hiding it from you. What is just “blue” is ripping up in me, nearly dead and bleeding on cold cement, in an alleyway.

Mom always said I was too melodramatic.

Yesterday was one of those days. So I tried to make it better. I tried to wring it out, like a tired old dishrag. I piled some… things in a bag– notebook, water bottle, pen, magazine, tourist map, rubber gloves– and went out.

I made it as far as Paddington Station. One stop. I got off and went out of the Underground, into the train station. It was afternoon, early. I thought I might go to Guildford. I looked at the monitors. Reading, Swindon, Twyford, Oxford, Heathrow. Nothing to Guildford. I remember Bryan maybe said Waterloo Station or maybe Charing Cross. I bought a chocolate chip cookie from a girl who didn’t speak very much english. I looked at the station, then walked around a little. My head felt full. The skin on my face felt heavy. I let it hang there. I stared at the sushi at Yo! going round and round. I saw the sign that said how Yo! worked, but I didn’t read it. A man was drinking a Coke, sitting at cafe table. Nearby, there were some couches. The coke, and the couches, looked good.

I followed a man with a big backpack. He got in the cafe line. I got in line behind him. I ordered a pita, with chicken and rocket and pesto. And a water. I sat at table, even though the couch area was non-smoking. The girl came around and put black plastic ashtrays on every table. But not mine. I would have told her not to put it there, in a not very nice way, if she had tried to put it there. But she didn’t.

On the Tube, I got on the front car. It’s noisier than the other cars, closer to the engine. I had to turn my music up louder, even though it is killing my eardrums.

I got off at Charing Cross, and walk out of the station. At the top of the steps, on the corner of the Strand, two guys were looking at a print-out map and trying to find their way. I hesitated, then walked on. 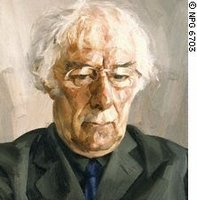 I wanted to go see Fiona Shaw in her bra again. I ended up staring, for a long time, at Seamus Heaney. It was warm inside the gallery. I kept my headset on, listening to music inside the Portrait Gallery. I sat on the bench, the wide bench, and stared at Seamus Heaney.

The artist who made the oil had a name that didn’t have a gender: Tai-Shan. The placard gave the artist no gender. I walked up to it, read it, sat back down. I stared for a long time at his face, at brush stroke mouth. One strand of hair, unblended titanium white. The almost invisible eyeglass frames.

Beowulf, he wrote, or rewrote, I considered.

Then he who had harrowed the hearts of men
with pain and affliction in former times
and had given offence to God
found that his bodily powers failed him.
Hygelac’s kinsman kept him helplessly
locked in a handgrip. As long as either lived,
he was hateful to the other. The monster’s whole
body was in pain, a tremendous wound
appeared on his shoulder. Sinews split
and the bone-lappings burst. Beowulf was granted
the glory of winning.

I left that room, and looked more in the gallery. The day did not lift much. I left and wandered more. I went home, eventually, and waited for my husband to come.

It was a blue day. I spent it alone, and with Seamus. I did nothing but not die that day.

3 comments for “Surviving a blue day”