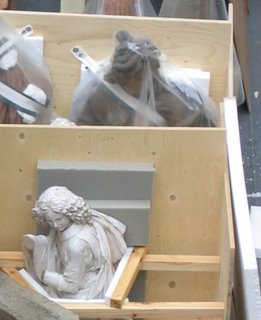 Navigating a new friend is like discovering a new museum.

What is new about it, anyway? It’s been here for years. Yet it is new to me and I am new to it.

Michael told me, casually, offhand, that he cleaned objects at the Victoria and Albert Museum in South Kensington. It was over a pint of beer, after writing class. Our little group was still gelling. We didn’t really know what we were all about, except drinking, and writing. And breathing. 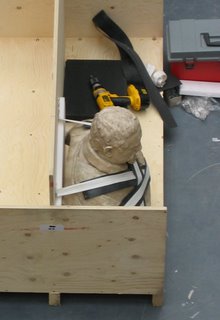 Adding all the parts together, maybe, gets something quite usual. It’s like looking at an object with one eye squeezed shut. But with both eyes opened, there is that depth, that character of light that draws you in. The cloudy repression and, then, sudden glimpses of blue sky. That is Michael.

I asked Michael if I could come to see him at work. It mattered to me, to see this piece of London through him. It doesn’t cost anything to go inside the V&A. I had been inside before. But I wanted to go inside with him.

You can’t see his age, unless he tells you. Michael has been walking on the hard, marble and stone floors for 18 years. He says “I’m rubbish giving directions in here. I can’t tell someone how to get somewhere. I just have to show them.” I wanted him to show me. I wanted to squint a certain way and see what he was seeing, in the way he was seeing it, everyday. Beauty and age, yanked from awe, cast in its everyday form.

“What do you want to see?” he asked me when we met in the foyer. He was wearing a sky blue shirt and blue jeans. Michael is tall and thin, with chiseled features. He could be standing on a pedastal, with some other object cleaner dusting him. Except for the life in him. 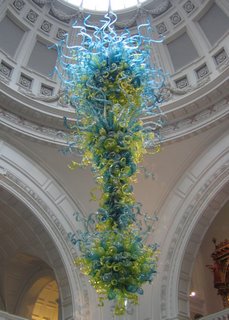 I kissed his sculpted cheeks in that repressed English way, then hugged him in my effluent American one.

“All right,” I said. “I want to see your three favorite objects.”

I was remembering my friend Larry, a clay artist. He lives in Connecticut now, but when I knew him, to earn money, he worked as a security guard at the Nelson-Atkins Museum of Art in Kansas City. He stood in doorways and corners all day. He wore a cheap blue sport coat. He eyeballed backpacks and chewing gum. And he gushed over the “Waterlillies” by Claude Monet. “Elizabeth,” he breathed, “I could stand in that room forever.”

“Well,” Michael said, looking up “Your standing under the first one.” I gazed up.

The Chihuly chandalier dangled dangerously over the heads of informants at the rotunda desk. “It’s a bitch to clean. You can’t see it from here, but it is really dusty.” 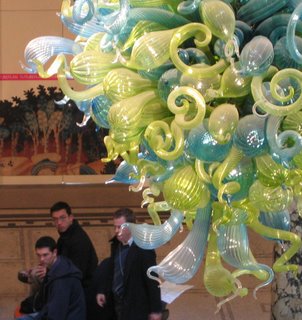 He led me up the stairs to the next level and we hung over the balcony like school children. I wanted to drop spitwads on the unsuspecting visitors, but I didn’t. Instead I tuned in.

“They used to use scaffolds and build them up all around. But they’ve built that desk there and it doesn’t move. So now they hire one of those mechanical things that go up and down. A cherry picker. I don’t do it. I’m dreadfully afraid of heights.”

His eyes darted around, and I tried to follow. I took in everything: the rooster, the Jesus, the women vacuuming the 400-year-old Persian rug, the scaffolds around the staircase. 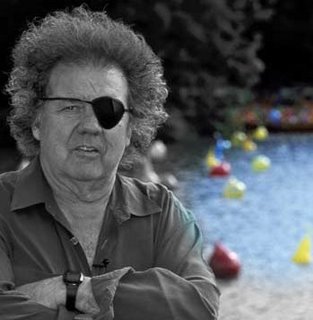 “Just look at it. It’s filthy. They clean it once a year.”

“Have you ever met him?”

“Who? Chihuly? No, but I saw him here. With great, wild hair and a patch over one eye. He looks like a pirate.”

I wrinkled my nose and laughed. I told him about the Kew Gardens Chihuly exhibit, where the glass grew like glinting hard fossils out of the dirt and bobbed in the lake like beach balls.

Then he clapped his hands. “Right. Number two.”

We wound back down the stairs, around and through the bodies gazing up at the glass sculpture. Michael stopped. 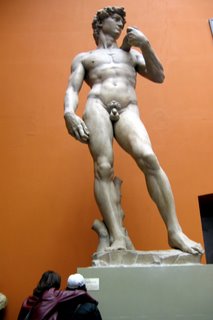 “It came in two parts,” he said, remembering. “The lower part was here, and then, later they added that top part. Apparently, one of the most popular questions asked about it is ‘how do they clean it?'”

We turned the corner into a cavernous orange room made small by its objects. Sculptures and friezes lopped from the guts of churches and casts of gargantuan ancient pillars covered the floors and the walls. Tiny humans mingled among them, even tinier mouth hanging open.

“Number two.” Michael said, clasping his hands in front of himself and looking up at the young man, naked.

I had seen this man before, in Florence. His name is David. There are Old Testament stories about him. He is a saint. He is a ruler and a musician. He is art.

The veins in his hand, his bulging eyes, the thick, luscious curls stop you in your tracks. He is enormous. It is impossible to understand his size unless you stand under him. From this angle, you can’t see the slingshot tossed carelessly over his enormous shoulder. You not only forget, but you cannot imagine that he was the little one, facing Goliath. You only see a king.

“Have you seen the original,” I asked “in Florence?” He shook his head. “It’s so white,” I tell him. “And as you approach, you see Michelangelo’s sculptures Il Prigione.”

“Mmmm…” Michael listened, but let the words fall away. He was thinking of something else. I waited, interested. He turned around.

“It’s really a very different experience,” he said pointing up at a high balcony overhead, “to see him from up there. You can’t go there. I can’t even go there anymore. But we can go up there.” He pointed to the gallery overhead.

I followed him out. He walked, and talked about the fig leaf that David had to wear when Queen Victoria came to visit. It’s mounted on the back of the statue. “Silly Victorians.” 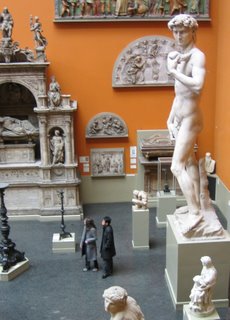 We passed through a hallway lined with wall-sized mural paintings. Michael breezed by. I glanced at them, but scrambled to keep up.

“Michael,” I asked him as we stopped and hung over another balcony, gazing down at David from the far end of the room, “your life must be very different, being around art every day, after all these years.”

“Oh, I don’t think so.” He said quickly, waving his hand. Then he stopped. “Well, I suppose maybe.”

He was quiet for a moment. I glanced at him, but mostly I watched the people swarming like ants underneath the feet of the David.

“I suppose, being around beautiful things everyday… maybe it does change the way you look at things.” He paused. “See. He looks much different from this angle. The proportions change.”

“He’s meant to be looked up at, I think,” Michael concluded. We gazed a while longer. I wondered at the orange walls, but forgot to ask.

We left the Cast Courts, which were on the front of the museum and wound up and down and up again, I think. Eventually we passed through a corridor building that connected the front building to the back. The windows of the corridor looked out over the courtyard, not yet open for the warm season. Men were banging and digging. The fountain was silent.

Inside was dim, lit in a deep, brilliant rainbow of liturgical colors. It was a room of stained glass, windows encased in boxes and lit from behind. Michael sailed through, stopping only for a moment to talk about the outdoor cafe and glance outside. I gazed at the solemn faces, holding staffs and wearing long robes, then rushed on. 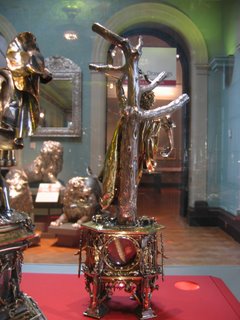 We stopped in Sacred Silver.

St. Sebastian, pierced with arrows. He was not killed by the arrows, so then he was clubbed to death. It was a sacred silver requilary, holding a piece of the Sebastian’s bone inside. He gave protection against the Plague.

The piece was German and it was “acquired,” which means that someone at the museum who loved silver and sacred silver longed for this piece. He or she– a curator by title– researched and searched and wrote documents and memos and asked for money, all so St. Sebastian could be purchased and live here.

I didn’t have anything to say about this piece. It was beautiful. “Perfect,” Michael said, “except for the missing arrows.” I looked at it. I mumbled something about St. Catherine of Siena’s head enshrined in the church there.

I wondered, after the enormity of the first two pieces, why this one touched him. I didn’t ask.

We walked back out and stopped by a back window. The windows on the back of the building looked out over the churchyard of the Brompton Oratory next door. “You really should go in there. Have you been?” I shook my head. “It’s beautiful. I go in there, just to light candles.” His arms were crossed against his chest, but he released a hand and pointed. “A community of priests live here. It’s very odd thing. It isn’t a convent. … Just look at that gorgeous magnolia tree.” 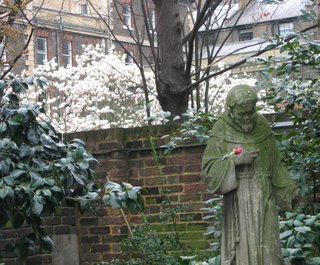 I looked at it. The branches spread wide, heavy with the weight of the pink-white flowers.

Michael had to get back to work, so he let me into the Modernism exhibit and kissed me goodbye. I was glad he’d worn that blue shirt: it made his eyes, whether grey or blue or changing, sparkle and reflect the blue from his shirt. I missed him when he was gone.

I rushed through the Modernism exhibit, intellectually impressed, but uninterested in factories and socialism and cranes hoisting cement. I wanted out of that cage and back into the sensibility of the museum of Michael.