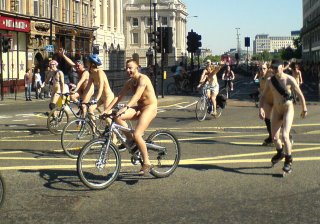 Colin, Chris and I were just hangin’ out at a pub on the Strand, just moments after England won their first World Cup match, when we heard a commotion on the street nearby.

Police escorts and everything for these 750-plus in-the-buff protestors/celebrators. They were protesting oil dependancy while celebrating the individuality of the human body.

You have to give a guy credit for climbing onto a tiny bicycle seat, bullocks to the breeze.