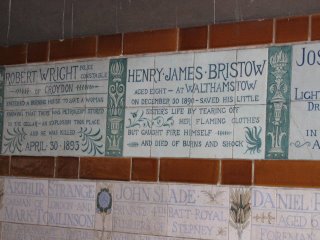 London holds its secrets like a favour. You are only rewarded if you go look for them, and if you ask.

I walked today between raindrops, between eras, between churchyards’ gasps of silence and the blat! of a city beside them.

I went to St. Paul’s Tube and the City of London to meet Jean and 30 other tourists more green than me. Only 7,000 people live in the City of London. I came here, not to see its steel finance, or to meet its residents, or even to feel the weight of its long-laid cobbles. I am looking around: spying young tree growing on rooftops, imagining lives dead and gone and wondering how—from just a glance like this—I am supposed to know how to hold onto London after I go. 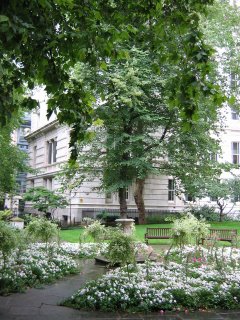 London loves her history. She wears it under her skirt like six or seven or 70 silk and muslin petticoats, some rougher and heavier than the others, all there to make her look grander, more important. Like Smithfield Market, now not much more than a tarted-up iron-work trellis, it is loud and busy in the mornings with diesel fumes, farm-raised carcasses, refrigerator trucks rumbling—all surrounded by ugly, post-war buildings. No more dirt or grass, the 700-years of blood-soaked “Smooth Field” not even a faint memory. Bloody Mary burned thousands of Protestants on this spot. Now there is a roundabout and a plaque. History becomes something imagined. 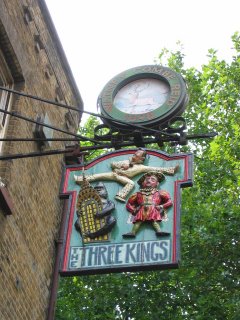 We followed Jean along the streets, one called Cloth Fair. Her story of the poor tailor, pushing back through the crowds at the market, shouting at the dodgy vendor over the rotten bolt of fabric sold him: I could see it in my mind. But still my mind was busy as it watched a young woman get out of a man’s car. Her white denim mini-skirt hung from her pubic bones. “Bye darling” she said, and licked her painted lips. Her flip-flops smacked the wet pavement as she walked away. Where does she live? Not here, in this white-collar island, where businessmen abandon the city like a mistress on the weekends. The history hangs around, like this girl, a misfit in the hidden lanes.

Although there is still traffic and people, it’s quiet in London right now. It’s just the tourists. It takes a Londoner to notice that. The bank holiday marks the end of kids’ school break, so families are away, tourists themselves in some other land. We are all walking blind, when we go to a place like Clerkenwell. 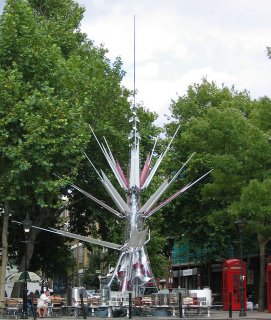 The city workers scuttle by Charterhouse Square wearing their iPods, clueless to the thousands of plague victims buried under it. And the tourists who visit, bite off tiny chunks of history without any sense of daily life in London: the misdemeanours of the living world that spins by, on two feet, or two or four wheels.

It’s hard to look, hear, to take it all in. Even one little village, like Clerkenwell, with the peasants revolt, the martyrdom of William Wallace, the New River, necessitated by the filthy drinking water in the old one, the Courts of Dusty Feet in Cloth Fair, Handel’s sly performances in the home of the musical coalman Thomas Britton, all of Henry the VIII’s Catholic destruction, and the bombs and evacuation in the Blitz. Here you find a tiny corner of the world that hosts thousands upon thousands of layers of lives which are no bigger or smaller or less complex than mine. They are just past.

The past changes, like the Fleet River. It cuts through a city, then it goes bad with rot and decay. It gets covered over and, then, when it refuses to be hidden, it explodes and shows itself. Open, exposed, redefined. And then it is covered over again. But it is always there.