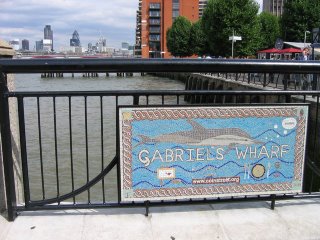 At Coin Street, Gabriel’s Wharf, you are finally there.

The gross cement casings of the new theatre parade are behind you. You can see Old London rising up across the Thames, behind its bridges. The clatter of the skateboards has died underneath the Waterloo Bridge. 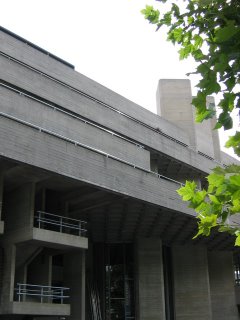 At Coin Street, South Bank yawns and kicks. The tide lashes the banks and the pier. Tourists walk by on their way from one sight to another, hardly looking at to the land they are anchored on, this side. Their necks swivel toward the London they know, across the way.

Over there, on Monday, in Clerkenwell, taxis roared by. I could not see the Smooth Field of the past. Maybe if I tried hard I could still hear the strains of Italian sopranos singing in closet rooms, practicing in exile from their homeland. But connection to the older past, under all that steel and Wetherspoon-progress, seemed severed, like a head at the chopping block. 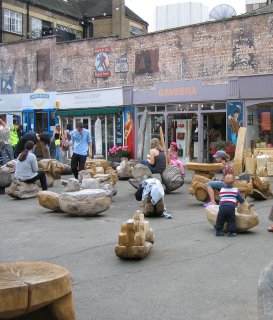 But the South Bank, here in Lambeth, feels its ghosts, the marshy upbringing—work, sweat, toil, space and filth. Like Bermondsey, the working-class southeast neighbour, redolent of its long-gone tanneries, where no one WANTED to live, for the tools of seasoning were animal waste: urine and faeces. Waterloo, its belching industrial waterside until the Wars, when it became a queue of bomb craters.

Culture climbed out of that rubble and now trapped in horrific 1960s cement architectural prisons are the National Theatre, the National Film Theatre and Festival Hall. Bunkers of subsidized cultural evolution.

It’s strange, for me, taking these “Original London” walks now, after living here two years. I am not a tourist, so sometimes I hardly need to look at what is pointed out. I’ve seen the awful hulking slabs of morbid grey cement that are the “balconies” of the National Theatre. I’ve visited the funky, cooperative, low-rent shops at Gabriel’s Wharf. I know the tale of OXO Tower, with the “windows” that spell out O-X-O, even in an advertising-free area. 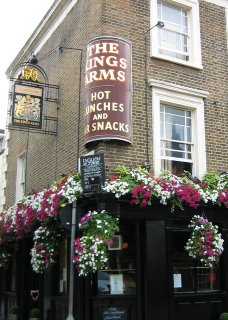 Yet why does the South Bank feel so beguiling? It’s as if these rows of buildings on the waterfront are a movie set façade with all the good workings behind. The ugly tower blocks still loom even though the Coin Street cooperative managed to save their little square of London. The Waterloo train line cuts through the houses overhead, even though the flower boxes at the King’s Arms still overflow with petunias. Meanwhile, the old flat-fronted workers’ quarters at Windmill Walk—where, in the early 1800s, “night soil men” came before there were sewers to take away the privy waste—are selling for £700,000.

Maybe it is the way you can stand in the streets here, away from the River, away from the main roads. Maybe it is way that tourists have dissolved, and Londoners—brown or white—walk in ones or pairs and eat, talk and look at our hoard as if we are lost souls. Maybe it is the way the water table here is ever-rising, so the Underground pumps must work 24 hours to keep the Jubilee Line from flooding. As if the old rural marsh is whispering “I’m coming back for it.”

Or maybe it’s the clear, unbroken connection to the machine—man to shovel to horse to tractor to forge to crane to pump. This side of the river has always been working hard. So if a bus or a screaming ambulance soars by, it doesn’t seem quite so out of place. Step into a garden, surrounded by gorgeously outfitted council flats, and the reedy bushes also have their place, holding the soil, using the water, filtering the air. 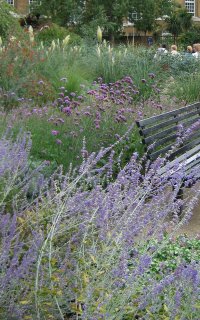 The South Bank is wild and sweaty and filled with true dirt, from the Pig Trotter Lady at the Old Vic and ravenous Hello editors to the Irish navvies building the railway and the distracted minds inside Bedlam. It is work and it is hard, and in South Bank, you feel it.