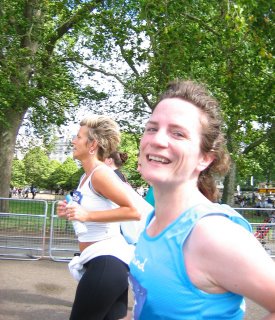 The HydroActive Challenge 5K is a race for women and there were woman all around me. But even so, I didn’t feel like talking to anyone. Almost everyone there was running for some charity or other, so the other runners were travelling in packs of matching shirts. I saw a few people wearing the “Mind” shirts like mine, but I didn’t care to talk to them.

When I worked for Michael Forbes restaurants many years ago, my boss and friend Kate Riley said she’d always wanted to run the San Diego marathon, but she’d never gotten around to it. So I signed her up for it one day. I remember her face when I told her. I remember saying to her, “What? So just do it now.”

And she did. She didn’t complain or even hardly talk about it. But the next week she just started training, running in all her free time, which wasn’t much. I was really proud of her and boggled by it. Even up until recently, I couldn’t imagine running for longer than a minute or so. I’d tried it on treadmills and despised it. And here was my friend, who went home, after a 10- or 12-hour workday of work, laced up her shoes for a 8, 10 or even 20-mile run in the dark. 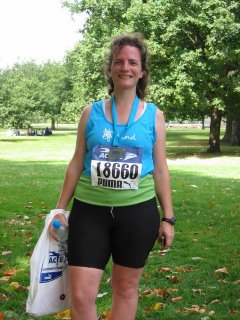 Kate Riley ran the San Diego marathon, and even though I had some feeling of credit for getting her there, I knew I didn’t do any. All that ever happened was I carried even more respect and awe toward her. She became a superwoman to me.

I don’t have any intention to try and run a marathon. I really only have enough attention span for one mile or two and then finally the three point two I ran on Saturday.

There isn’t any reason for you to be proud of me or to think what I did was interesting. I raised money for Mind merely because I signed up too late to get my own spot and had to go through a charity to get one. I ran 5K, which isn’t far: Colin ran the New York Marathon in 1998 in four hours and 54 minutes… that’s four hours and 14 minutes of running more impressive than my run.

The only thing I can say about this run is that it– along with the morning runs that led up to it– showed me something different about myself. It opened up a little space inside myself that I never knew of before, something I’d never seen. And even though maybe no one else can see it, I can. It isn’t about “healthy” or “fitness”
or anything. It individual and it is quite unexplainable.

Thanks, by the way, to all the people who are in the big huge pyramid of support underneath me. You may not even know you are there or know what you did to keep me running around the park every morning, but even though I ran all by myself in that crowd Saturday, I was not alone.

3 comments for “My Run in Hyde Park”