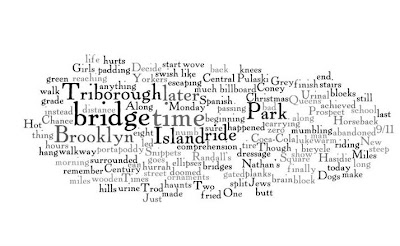 My butt hurts still today,
But not as much as my knees do.
Which goes to show you…
Having all that padding isn’t
Such a bad thing after all.

I’m brain fried, 24 hours later,
With zero comprehension
Of time or distance,
Though I can remember the bridges
and the hills that led up them.

There was Brooklyn in the morning,
And Pulaski later on,
All the stairs we had to walk up
And down, carrying the bicycle
On the Triborough from Queens back To Brooklyn.

And finally the steep green grade
At Randall’s Island, passing by the
Horseback riding school, and the
Chance to split off and ride for a Century.

I am numb, on a Monday, 55 Miles
Further Along in my life. There was that
One last bridge and eight long blocks
To a lukewarm Central Park hurrah, and I can’t
Decide what I’ve achieved, if anything.

Snippets of time instead, hang off me, like
Christmas ornaments– the Coca-Cola billboard as I
wove through Times Square; wooden bridge planks, the same
Trod by escaping New Yorkers, on 9/11;
Nathan’s Hot Dogs, by doomed Coney Island haunts.

Two Hasidic Jews, reaching for an abandoned tire
In the street. Grey man mumbling in Spanish on
The gated walkway of the Triborough bridge. Girls in dressage
in Prospect Park. The swish of the urine the portapoddy
Urinal.

55 miles further along, and I am not sure
What to make of my ride, of how it happened,
How I made it. There was a start and a finish
But there was no beginning or end. Just a block of time
… surrounded by ellipses …

3 comments for “55 Miles Further Along”

END_OF_DOCUMENT_TOKEN_TO_BE_REPLACED

Today's artful August prompt is "round." So many t

"am I tender? say it again." Original poetry + dig

This poem is for the #mathteacher, the #engineer,

What a sweet week. @aniah_lator @tati

These two wonders. This was the only photo I had t

I’m so grateful for all who came out and support

SMILE LADY! Lol this is my RTF - resting typing fa