I find myself looking up and around a great deal in the walk from our flat to the places we go every day and every week:

The Tube
The Dry Cleaners
The Coffee Place
The Pub
The Bank
The Shops, for food
The Wine Store
The Corner Eatery

Here are a few images of what I see, around here. 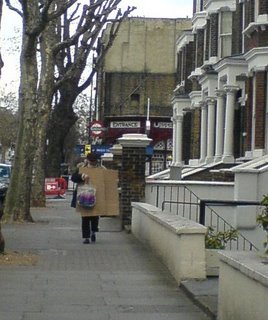 I was heading toward the Maida Vale tube area, where all the shops, bank, everything are gathered together. We used to live much closer to it; now it is a good 7 minute walk. I usually listen to music on my MP3 player. At the moment I saw this woman, I was listening to the theme from “Ghostbusters.” I recommend you download and add it to you mixes. You’d be surprised again what a great song it is. … How is she carrying this big cardboard thing? It was very windy.

I was standing in the queue at the ATM and I was about to take THIS photo: 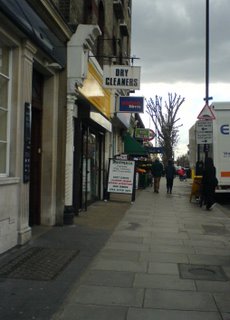 Just the shops, you know. Harlequin Dry Cleaners, where the VERY spiffy middle eastern man always just says “Folded or hangers? … Leave it to me, Miss Howard.” And everything is perfect. And the bank, where I cried so hard that they finally gave us an account. And the Tube, where inside the nicest Filipino man and his son have a newsstand.

So I was pushing the shutter on my camera phone to take that photo– obviously standing in the middle of the “pavement” as they call it here– when someone brushed by me. And THIS was the photo that I got: 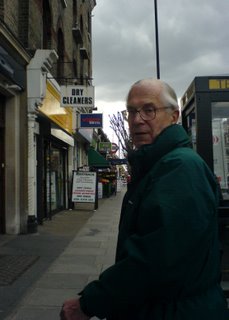 Hell-LO! I call him ERNIE. I like his glasses and his puffy green jacket.

Across the street are a few very important places that we frequent alot. 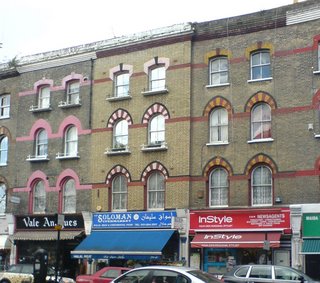 One is the Halal. I guess I can see by looking at this photo that it is called Solomon’s, but I never knew that till now. We always just called it “the Halal.” It’s a food shop, the one with the blue awning, but the key is the meat. Man do Middle Easterners know how to do meat. Of course, there isn’t any pork or beef (you can’t even buy bacon flavoured crisps there!), but Colin has mastered the art of lamb-burgers, and we love chicken, so that is fine with us. We don’t exactly have anywhere to grill out anyway. You can get great nuts at the Halal too. And yummy frozen samosas.

Next door is another funny place, the place we used to never go. We couldn’t figure out why we would want to. It’s the “News Agent.” But I do occasionally go in there for envelopes and candy. They have alot of magazines, but I prefer to buy them at from the guys at the Tube. There are always school kids in here, being rowdy. I think it’s funny that it has a magazine name on its awning. 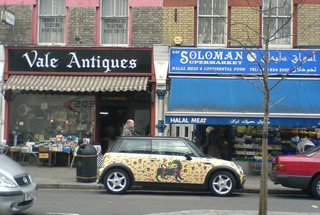 Next to the Halal, you see, is “Vale Antiques.” A guy named Peter owns this place and it is CRAMMED with stuff. We bought our friends Peter and Tim a decanter there as a house warming gift. It has the ship name “P.S. Irani” on it, which we discovered is sunk in a river somewhere. It isn’t easy to go inside this shop, but it is fun. China and silver and glass and wood everywhere. Peter, the owner, keeps boxes of used books outside… they aren’t antiques, but they are great for getting people to stop and browse. When he goes on holidays, a really cranky woman watches the place for him.

Oh, and note the crazy, custom-painted Mini parked there. I can’t believe it was there when I took this. I tried to hurry because the owner was just getting in as I went to take the photo (you can just see her inside it). She is as crazy-looking as the car. She lives up on Hamilton Terrace, or as Colin refers to it “that REALLY posh street.” That’s the same street where, one day Colin said, when Frances, Alex and I were walking home along that road: “Well that answers the age-old question: Where do you park your Bentley? Next to your Ferrari.”

I was hungry, so I went around the corner to Street Hawker for lunch. Now some people might eat at the Asian restaurant in their neighborhood just because it is there, it’s close by, it’ s easy. Not in this case. We (not the royal We, but I mean Colin and I) have cravings for this place. It is delicious. And the Express Menu is available all afternoon.

Now there are two really great things about Street Hawker, aside from the food. One is its location: 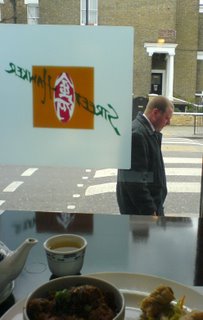 It’s right built into the end of the Tube station, with windows all along. You can watch everybody go by on their way into the Tube. 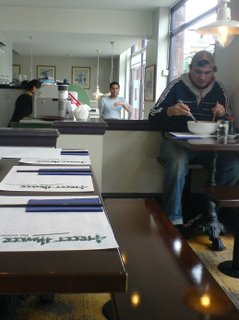 One evening, he ran after me on the street about a block to bring me the chili oil the waitress forgot to put in my take-away bag. He always waves at me and smiles when I walk by, too. Not in a creepy way, either. That’s him in the blue sweater. I took that photo on the sly because I didn’t think he would go for me taking his photo. He is kind of shy.

After I ate, I walked down to the Warrington. I had my laptop with me and I wanted to do some writing. Some days I go to Starbucks but somedays I can’t deal with all the kids and moms and the hard chairs and the tea. Sometimes I need this: 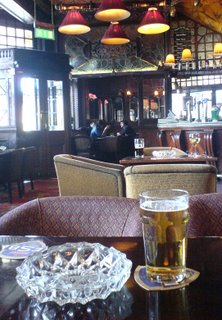 For those of you who are concerned, that is a “Shandy” — its half beer and half “lemonade”, what they call Sprite here. It’s quite tame and refreshing. And sweet. I can only drink two (equal to one and 1/3 American bottles of beer) over the course of an afternoon, and I pretty bleched out. I drink water too. 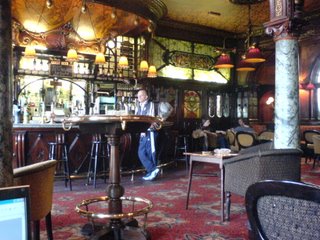 That guy standing at the bar is Ron. He’s a local. I’ve been running into him a lot in the neighborhood lately. He plays tennis, so I sometimes see him at the tennis courts when I am playing with Fiona. He’s a nice guy. I joke that he is stalking me, but he thinks I am stalking him.

I like working at the Warrington, both working on my book and working as a barmaid. It’s a great pub. I get to work with people like these people: 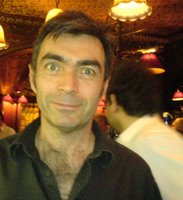 Gordon… Gordon is Scottish. I can’t say how much I like Gordon because I might get in trouble. But we like to have fun listening to the MANY different ways the customers pronounce our Caledonian IPA Deuchar’s. (Our favorite is the guy who asked for an IPP-uh ). In the background you can see the back of Martin’s head. He’s the “supervisor” barman. That’s why he wears the WHITE shirt! Martin is OK, but he can be quite stroppy (go look it up).

Then there’s the lovely Georgina… 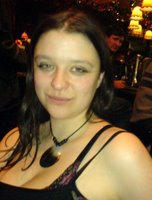 Georgina is a welder, although she, for some reason, always tries to deny this. I don’t know why. She has a great big motor bike and a really cute boyfriend. She also looks great in a tux. She made an excellent Gomez last year for Halloween.

I’m sorry I don’t have a photo of John. But I don’t. I’ll tell you about him another day.

I love the pub; it’s big and full of character. Everyone has story about it. It was a brothel. It was owned by the Church of England. It is haunted. It hires crazy American barmaid. The bar and the staircase used to be a part of the Lusitania. I don’t know what to believe.

I do get writing done while I am there. I DO! And just so you’ll all stop BUGGING me, here: 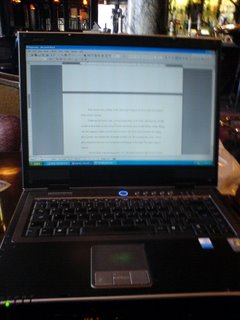 Go ahead read it! Enjoy. Let me know what you think…

I ran out of battery power at 6, so I headed home. It was pretty cold still, but we are getting more “sunny intervals” lately and the sky is so bright even until 7 p.m. It’s rewarding to look up and around, too, because you never know what you might see. 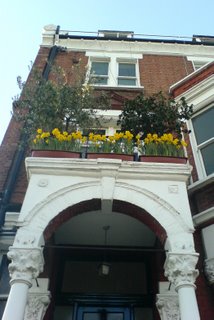 Well, that’s a walk around my neighborhood, around here.

2 thoughts on “Around here”