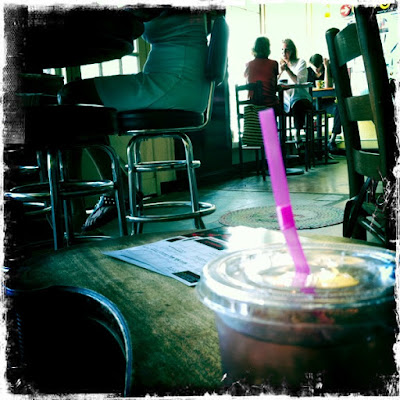 Being politically motivated and standing up for my beliefs had an interesting side effect of making it difficult to choose a straw for my iced tea this morning.

At my favorite locally owned coffeehouse, I purchased organic tea in a recyclable cup. Being the artful sort, I paused as I reached toward the cup of colorful straws, deciding which color would best go with the shade of my peach-tea.

The aesthetics of my heart wanted the pink straw. But in my mind, visions of Sleeping Beauty Aurora, helpless in eternal slumber, popped up. My brain stopped me.

The pink straw was the correct straw, aesthetically. But apparently my disdain for the prevailing social meaning of PINK was trying to override what the heart wanted.

For a moment, I became on of those crazy mumblers (fully acceptable at locally owned coffeehouses, natch) and heard myself say:

“Well, I just going to take the pink because none of the girls are here to force me to choose it.”

The little girls will do that. They have been force-fed the Disney pink — and all that it implies — since they were big enough to prop up in front of a DVD/TV combo.

The cost of princess-ifying our girls is heavy. As writer Kristy Quist notes, “It’s an identity based on image alone…Pint-sized princesses are adorable, and at best, this is fun, imaginative play. At its worst, it distorts a natural appetite for beauty and becomes an exercise in narcissism and materialism.”

Millions upon millions of girls worship the beauty, the gowns, the singing voices of the Disney Princesses. The machine that is Disney have created a factory of Dasmels in Distress — some who read, some who perhaps even carry a sword, but all who are, in the end, just pretty, anorexic and waiting to be rescued.

The psychology of that is real. We might as well be saying: what you say doesn’t matter, but the sheen of your hair and the size of your waist does.

Encouraging them to be “princesses” tells them you believe it too, that GIRLS ARE INVISIBLE TO THE WORLD. Girls don’t matter. Girls are objects. Girls expire at 40.

What I want to say is this: If you even look a little bit, you can’t help but be sick, sad, and terrified for the future of girls.

Sigh. All this, for want of a  pink straw to match my peach tea.

24 thoughts on “Disney Princesses Have Ruined the Color Pink”