With the Circus blogtour at MomCentral.com underway, I wanted to make sure I took time to visit the P.T. Barnum Museum in Bridgeport, CT. Ringling Bros. circuses are touring the nation right now, and in just a few weeks, the Ringling show “Bellobration” will be coming home to Bridgeport, October 23-26. 2008 at Harbor Yard. 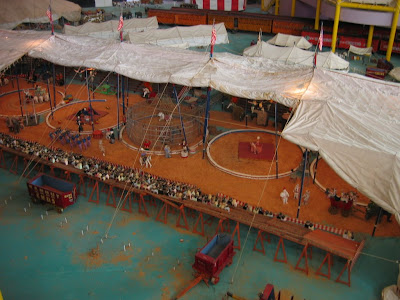 P.T. Barnum is honored around these parts, not only as a the man who created “The Greatest Show on Earth,” but as a forefather and city developer. Barnum didn’t even enter the circus business until the age of 61. Before he was wrastling tigers, he built his original fortunes with its forerunner, the strange and novel “American Museum” in New York City, on lower Broadway.

1. it was the parent to Barnum’s circus, a five-story “menagerie house” where Barnum not only promoted a love of music, art, literature, and science, but also dazzled and awed visitors with strange and marvelous feats of nature.

2. It was the American public’s first taste of “public entertainment” which did not exist or was considered “inappropriate” to the average American’s highest moral standards of the time. Barnum presented his lectures and his exhibits as the original “family entertainment.” His shows were the first to begin to attract women and children to previously all-male theatres.

Barnum, Bridgeport and a Circus Today

The Barnum Museum in Bridgeport is as quirky as the man, the circus he invented, and the city it sits in. Bridgeport flounders, still, as a post-industrial urban failure that balances on the edge of poverty and blight in one of the richest counties in the nation. It was gouged by corrupt politicians well into the second half of the 20th century and even with its gorgeous location on the Long Island Sound, miles of brownfields have kept developers, including Donald Trump, from investing in Connecticut’s wasteland along the water.

Barnum, a once-mayor of Bridgeport, believed in the city and built a quirky and exotic building on Main Street where the Barnum Museum now lives. It was to be a Science Museum in his time.  He died before it was completed. In the 1960s, the city packed up the artifacts and put in offices, using the beautiful building as an annex to city hall.

Now it is being restored and is recognized on the Register of Historic Landmarks. Barnum is recognized, too, with an annual Festival and Parade.

Slowly, the city is recovering, hopefully while holding onto its history. If you are in Fairfield County, you and your family really must visit this museum of the Great Showman, P.T. Barnum. For $6 (free for kids 3 and under), it’s a gem and a bargain, one that provides context not only to the history of Bridgeport, but to all public entertainment in America.

A Circus (Discount) Near You

Meanwhile, the show goes on. After Barnum’s death, the circus was run for a time by his partner Bailey, then,  eventually, the Greatest Show on Earth passed into the hands of the Ringling Bros., who have kept the founder’s names, and their spirit alive in the wild and hair-raising shows.

The Ringling Bros’ Barnum and Bailey Circus is on the move, so check out the website for the tour dates. Here’s a few cities, but you can enter your zip code online, for one nearest you.

(Note to my readers in Iowa and Wisconsin: There’s no tours listed for you on the Ringling site at the moment. Closest location was Chicago. Check back or write letters!)