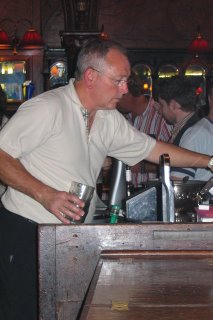 This is John. For 25 odd years, John has been doing just what you see here… serving pints at the Warrington Hotel.

It isn’t an easy thing, to be a landlord. Sure, on the surface, it seems like a cakewalk. Hire a few Aussies, order barrels of bitter, decide between black or yellow shirts, and work some late nights. But serving your friends, your neighbors, tourists and strangers, day in and day out, year after year, is not easy.

At the 11:00 chuck-out, there is always someone begging for a lock-in. You have to be gentle and patient and kind, but firm. And you have to do it flair, because by 11, the effect of alcohol is pronounced. Rowdy, noisy, sloppy, sentimental, grabby, belligerent, mean or sometimes just plain inert: moving a customer out is not as simple as it seems. Especially when they don’t want to go.

But why would they want to stay? Why would anyone want to hang around past bedtime, at, say, the Warrington, rather than the Elgin, or the Robert Browning or any other respectable pub in the area?

There are words for what the Warrington has got. Buzz, some people call it. Vibe. A history, or a “feel.” But where does that come from? 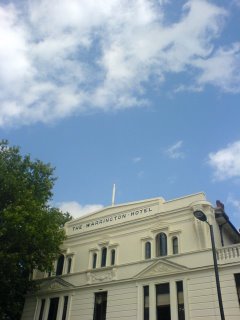 Is it the marble bar with bits of it dissolved away over 150 years, from the acid in cider and the pressure of the taps? Or the lovely sirens dancing over your head, casting a spell of temptation?

Maybe it is the music? Not a hi-fi, but the songs from the bar staff or the regulars, singing when they feel like it, or the music of glass-on-glass, and voices piling on top of each other.

Is it the heavy cherry tables, or the newly-upholstered chairs, lazy and langurous, carved and shapely? Maybe its he cut of the crystal ashtrays, deadweights that have been knocked around so much, they each have their own shape?

In the Warrington Hotel, they all rest here, at ease. There isn’t any pressurised, nuovo “ambience.” It isn’t rather any grubby unease; the local watches the tourist gape at the ceiling and smiles, letting their gaze follow again.

The old place, after 25 years together, looks like and feels like its old governor: soft and kind, a little hard to know, but always welcoming and gentle. Casual yet well groomed and put-together, it sits back on its heels and flirts quietly. There isn’t any flash: even its gorgeous spectacle is lovingly subdued. Like John, its hides itself behind the people inside, lets the life glimmer, waft, and roar its way around out the narrow doors in its own time.

In the afternoon in August that I came into the Warrington, that I first met Penny and gave her my number to give to John, how could I know what would come of it? And how could any of us know we would be here to watch it come to an end?

I learned to pull an English pint of beer from a right proper pubman in a beautiful old London pub. If that is the only story I have left in the end, that is saying something.

2 thoughts on “How to be a Proper Pubman”