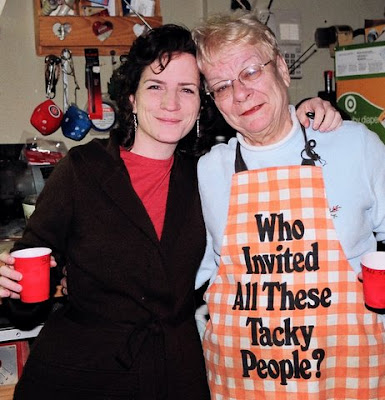 Day 8, #reverb 10: The Beauty of Different (Thanks, Karen Walrond.)

I live on the East Coast, in the glowing gutters of the GOLD COAST.

I am not from here, however, and that makes me “different.”

That’s right. I’m not from these parts.

I’ve traveled and lived all over, but moving to “The Small State” was my biggest culture shock.

I came back to America after having lived in London for three years. DYING for a decent pizza and, finally, some warm-heartedness. Well, the pizza here just plain disappointed (no, I WON’T drive two hours just to eat) and the people, in general, were cold, cold, cold.

After all… I am from the Midwest. More specifically, from Iowa. This is home to the “State Fair” and Cloris Leachman: What could be more wholesome and sweet?

(I’ll pause here to let you Etch-a-Sketch me and Cloris  in your mind, wearing overalls, chomping hayseed, milking the butter cow.)

Iowa: You Make Me Smile (with Wonder).

Iowa is fly-over country and I like that. I can tell you, because I’m surrounded by old friends who are amazingly talented Iowans, like her and her and him, they aren’t a bunch of hayseeds and ignoramuses. The perception of the Midwest by East Coast is perfected into a hardened candy of despicable disdain: a combination of political angst and pure assumption. But it is wrong. Oh well.

So people evade the obvious and just ask about my years in London. No one ever asks what Iowa is like.

(Caveat: When I started hanging out in the Slow Food movement, I got a cache with the Iowa thing. When it comes to heritage pork, it’s hip to be corn fed. Ironically.)

I’ve been pretty defensive about it, all along. I am proud to be an Iowan (and a CYCLONE!… no stinking Hawkeyes!). But that is difficult to explain to the set of people who are busy training for the regatta and arguing over which Ivy covered institution should receive its half a million dollars and generally uninteresting 18-year-old. (Yes, I too have an Etch-a-Sketch!)

I don’t turn my nose down at this life and the people on the East Coast. It’s got its joys, especially the established towns and the history. Also, I’ve learned in living all over — from Long Island to London to Kissimmee to Waterloo: every place has its idiots and its beauty.

So yeah, I miss the simple joy of lounging in the garage with my brother-in-law, drinking beers while the kids ride their bikes, well, wherever.

But I wouldn’t trade all the things I have learned and earned along our journey.

(Here’s Where It Gets Random)

Like, did you know, for reals, you should not tip in British pub?

And that a “patch” is a completely different drink request from  “fresh ice?”

Because I am feeling generous, I’ll share with you a recipe for a popular drink drunk of the underaged, in England.

– Fill the glass to half with fermented Irish cider, such as Magners

– Top the pint with some kind of lager. Carling is fine, or Kroeneberg if you are feeling fancy.

– Serve by shoving across the table/bar and spilling/sloshing liberally. No bev nap should garnish (too de classe) .

7 thoughts on “I-OH!-Weigh: Please Fly On Over”