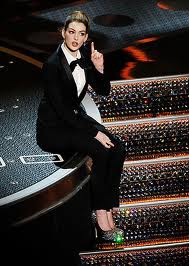 I’ll be the first to say that I love James Franco. His mute performances on SNL skit “What Up With That?” always tickle me.

But let’s be real. He wasn’t the REAL star of the Oscar duo last night.

There’s going to be all sorts of mumbling and grumbling about the Oscar hosting duo in the news today. The producers want to keep the prestige of the penultimate awards show, but the keep glancing over at all the fun everyone is having at the Golden Globes and think: I want to be the funny guy!

They tried too hard this year, trying to bow to Oscar greats like Kirk Douglas while roping in the youth. Big surprise. The split personality didn’t work. 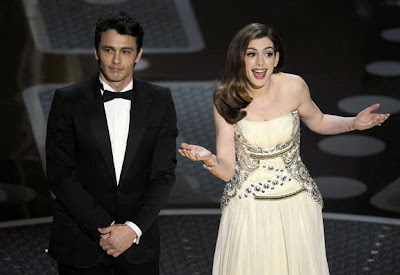 Although it was hard to tell because of the many flubs and blunders of the producers who were  very busy trying to make everyone — including themselves — the star of the show. (Did you you see one of those producers? That weird little guy that ABC’s anchor Robin Roberts interviewed right before the beginning of the show? Spielberg mopped his brow. That should have been cut.)

Rule of writing: write for your audience. Which I suppose is a tough one, when your audience is, well 1 billion people worldwide.

Except that this audience does have something in common. The audience of the Oscars is people of ALL ages who love Hollywood.

They loved it when Cuba Gooding Jr went madly insane and won his place in the establishment, they love it when perennial nominee Randy Newman sings — again — and when old standbys like Jeff Bridges make career comebacks.

They love that Justin Timberlake made his move to the screen and that there always seems to be one young ingenue amazing us every year.  In 1999 is was Natalie Portman… look where she is now! We can hardly wait to follow the careers of Jennifer Lawrence and Hallie Steinfeld.

They love Hollywood so much, they sat through YEARS of Debbie Allen’s choreography without a mutiny.

Why is it so hard for the producers to write a beautiful, fun evening with this in mind? 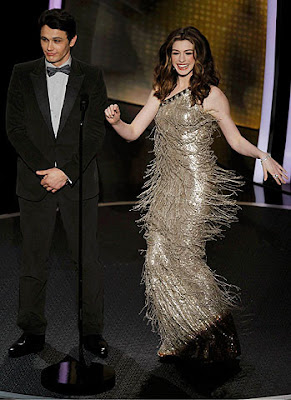 The evening would have worked better if they didn’t try so hard to “appeal” to people, because that never works. Anyone who has every TRIED to impress a girl or boy they like knows just who well that works. (Hollywood should know that too since it’s the plot of several trillion romance and teen films).

The reason Ricky Gervais works, the reason that Billy Crystal worked (and Steve Martin too, though in a different way) and Bob Hope in his time, is they are truly great at what they do. Funny people who took their job — to entertain for the evening– seriously, and who contributed to writing an evening that isn’t about apps and Twitter, but about great showmanship.

Get a performer — young or old — who connects with the audience through humor and a flaying love of film and Hollywood– and you  have your host.

Why were they flying the obviously pre-occupied Yale phD student James Franco across the country when Anne Hathway, clearly, had the job covered?

On stage by herself, she looked comfortable, she ad-libbed with finesse, and she had the beauty and the charm of Gracie Allen. Next to James Franco, the chemistry we expected (of Burns and Allen) was empty and absent.

Anne Hathaway filled the spotlight just fine. Next year, the Academy should do what they should have this year: give her a solo gig and leave the lame iPhone app jokes out. But they probably won’t, which will be their loss.