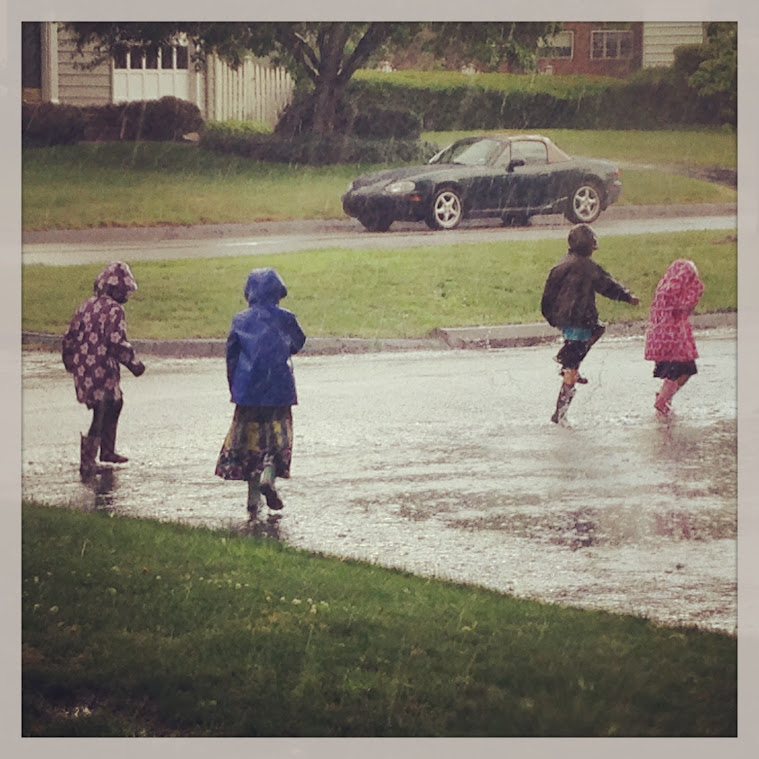 At the beginning of my parenting experience, I said “no” often.

The noise and the mess was a lot to handle. Not to mention the plain issue of just keeping track of where all the little live bodies were in space and time. And what they were planning to put in their mouth at that exact second.

Eventually, though, it eased up. And with that has come the vault of my own past opening up.

Even though I am fairly nostalgic, I don’t actively think about my childhood a great deal. Now and then, though, I realize that my memories — and Colin’s too — are becoming a very real part of my kids’ life, playing out like an a digitally remastered movie in front of me.

The Street Where We Lived

We lived on a dead-end street growing up, with no fear of any traffic. There were two sturdy maple trees in my front yard. The red maple was better for climbing, however.

With all my siblings, and the neighbor kids, it was an outdoor free-for-all. We knew every kind of tag. We ran in the maze of the poured concrete foundation before they finished building Mr. Petty’s house.

Across the street we had an empty grassy lot where we played kickball and volleyball and Ghost Comes Out at Midnight. At the end of our 7-house street, there was another empty lot, for most of my early years, till Marty’s two-part house moved in on two big trucks.

And, best of all, at the end of the road was a huge field the size of four city blocks. It was just long, unmowed grass, mulberry bushes, and apple trees. At the bottom of the hill, scrub trees grew up and ran along the railroad tracks there. I am not sure if this land was own in part by the railroad, or by the hospital down the street. Probably a bit of both.

A couple times a summer, an anonymous guy on a big John Deere would come and mow the field, but for the most part, it grew wild. We’d play “Planet of the Apes” and hide in the long grass. We’d get all manner of bug bites and chigger bites, but it didn’t seem to stop us. We’d explore the woods along the track, and climb up the apple trees. We built a tree fort behind a neighbor’s house in the perfect three-leader tree, and argued over it happily. Until little Terry pooped under it and we all but abandoned it.

I know I was lucky to be a younger sibling. I am sure my older brothers and sisters were told to keep an eye on us little ones. Maybe they did, but I don’t remember having to do that. I just remember the freedom — the expectation — to roam in the summer and to be kept busy with our own thoughts and the friends who happen to live nearby.

And to holler “Here I am!” when Mom heard the sound of the train whistle and called to us to answer.

Now I am not a kid anymore and I live on the busy East Coast. Now “times have changed.”

A few days ago, all the kids were outside and Isaiah was on the driveway when it started to rain. Not a bit of a drizzle, but sudden downpour. Isaiah’s face lit up and he spread his arms wide. I called them to come in, but I flashed back to the hot summer day that mom sent us all outside in the rain in our swimsuits.

“I see that. Why don’t you get your raingear on and head out. Tell the others.”

Her face filled with a whopping grin.

As I watched them stomp through the puddles, I could recall exactly the grit of the worn blacktop on my street, and the curve of the fast water as it rushed down the little slope towards the main road. My own feet tingled with the memory of our sidewalk’s gritty texture, and the smooth relief of our front stoop.

“Mom!” Kiki said breathlessly in the doorway. “My dress is soaked!”

“Well, might as well just take your rain jacket off.”

The Past Travels Forward

I think my mother said no to us often as well. She must have had to, for the same reasons. Mom was happiest at home, she always said. I can see why. It’s the safe place, where the kids can be free to roam in their yard, and in their imaginations.

Sometimes I remember a moment from my past, and I can’t believe that I am not there, that I can’t get back there. I don’t feel anything you’d expect in that moment — not remorse or sadness or grief. Just a complete sense of disbelief. How can something so real and true be so untouchable?

I know I can write it down, to remember it. I can even dream about it, to relive it again. But I am starting to see that the past only travels forward in our children, and what we have to teach and sing and offer.

2 thoughts on “Our Memories Become Theirs”