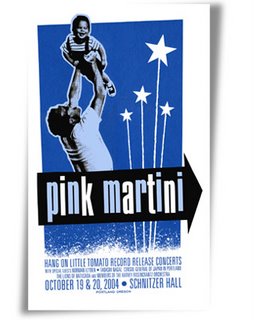 If you weren’t at the Tower of London this past Saturday night, you missed two beautiful, and very different things. In no certain order.

Pink Martini at Tower of London

I believe it may be that communications still occur, via the Atlantic, by Dixie cup and string. And that, my friends, is why the Dionne Warwick packed the place on Thursday night, but still the poor sweet Londoners don’t know about this lovely, gorgeous, lip-smacking Portland outfit.

Outfit? Gang? Band? Orchestra? It’s hard to put a fixture on Pink Martini. They feature the pippish Thomas Lauderdale (rural Indianian) on a very grand piano, the gloriously carved China Forbes on vocals– singing in French, Japanese, Portugese, and, occasionally even English. The ensemble twinkles with the light of classically-trained musicians on trombone, trumpet, congas, cello, violins, timps and snares, even the clashing of cymbals. Just to add a little of “the usual” they round out the sound with bass, guitar, and tambourine, and chimes, as needed.

How did I find you, Pink Martini? How did this sweet Iowa girl, who lives in London, come dancing in the posh seats in a moat, in a prison, in the second most expensive city in the world?

Thanks, first, to my husband, who has a British passport and that traveling itch like me! Thanks most, though, to Suzanne, my “cosmopolitan” friend, who put together the fab mix CD “Bobbin’ with Bob Scott” before I left Kansas City for London two years ago. Featured on that CD was the cut “Amado Mio” (click here to listen to a bit) by some unknownsters. I caught up with it and, thank goodness, the Pink Drink and the Tower of London Music festival caught up with me.

Oh, and I got the good seats, I think, because of karma.

Sergeant Majors and Uncles in Law

Meanwhile, back in the moat, before the concert, Colin and Ginny and I had the picnic spread going on– all the best from the best Lebanese deli and grocery in London: Green Valley. We spotted a Yeoman Warder making his rounds, chatting up the picnickers when summoned (or maybe just checking baskets for Guy-Fawkes-like devices.) Anyhoo, as he came our way, Ginny piped up, “I wonder how heavy his hat is.” So I called him over.

Well, his name is Robin, if you please, and his hat was VERY heavy. Inside, the lining was rimmed with pins he’d received from guests and visitors, from all over the world. Robin was 41, one of the youngest Yeoman Warders (you must have been a long-serving senior non-commissioned officer in the Army, Royal Air Force, Royal Marines or, more recently, Royal Navy.) Robin joined the miliary when he was 18. He lived with the 36 other warders and their families, inside the walls of the tower.

Robin could have gone on to talk to others, but he didn’t. He dropped down onto the grass and stayed with us until the announcer advised us to pack up and head to our seats. Ginny is a professor of Medieval Literature, so she had some good stumper questions for him. Colin’s uncle-in-law, Jack Chaffer, was also a Yeoman Warder, back in the 70s, so that lit Robin’s fire too. And Robin loves Canadians (“I’m always attractin’ ’em!”) so I guess, even though he felt the urge to slip in and out of his shpeels on the moats and the kings, he was pretty relaxed with us. He even ALMOST told us about his dissertation topic. I reckon if we got a few pints in him at the tower pub later (he invited us) we might have gotten it out of him.

I sometimes wonder what happens to “normal” Londoners. The Londoners who go to their pub every night, who talk to the same group of friends, who listen to the same play list all the time. I know, of course, that London is not completely populated with these people, but I see them, from behind the Warrington bar. I serve them.

I wish I could slap a pair of headphones on them and make them listen to Pink Martini. I think, if you hear music like that– if you just meet a man like Robin once– you can’t help but feel that straight, narrow road before you dip and bend.