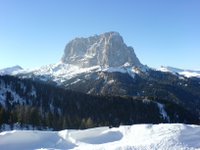 I did NOT want to go on this ski trip. Go skiing in the Alps? In Italy? No thanks!

But I am willing to bet that some of you understand. Skiing is not for everyone.

First of all, ski boots, as everyone, even skiers know, are serious, non-gender-specific, torture. Cruel, horrific pain of the plastic-est kind. If you can’t ski for crap, as I cannot, you can rest assured that you will spend a great deal of time walking in the killer boots from hell. It’s the only other option, besides walking back down the snowy slopes in your socks.

As for skiiing, well I don’t much like roller coasters either. Or crotch-rocket motorcycles (though I am dying for a Vespa). And I don’t want to jump out of a perfectly good airplane. So, yeah, careening down a slippery, 22-degree slope with a pair of waxed boards strapped to my feet, aiming for either that tree or that cliff, or those rocks, or that building at the bottom, has never been high on my list of things to do. 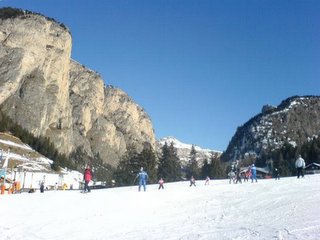 Was it because Colin wanted me to go? No, not really. Yes, he did want me to go. Yet, despite our wedding vows and his continual proclamations of love, I still have a hard time believing he will want me around when I know I won’t be in top form. (I can be a loud, whiny complainer.) He says he does, though. I say I believe him.

Was it because I was worried that Henry and Karen, our ski buddies, and Colin wouldn’t be able to afford it if I didn’t go? Uh, no. Henry drives a Porsche Carrera 4. Karen drives an Audi TT. IN LONDON. Sure, Colin rides a beat-up bicycle, but that is because he chooses to!

So was it because I felt guilty? Hell no! I have mastered the art of guilt long ago! Didn’t get 12 years of Catholic school for nothing! 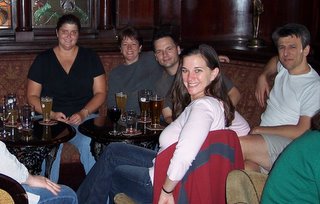 Frances and Alex were supposed to go. (This is Frances and Alex, here, pictured at right at the Warrington when Ann and Mary were visiting. Alex would hate this photo… he doesn’t usually dress like that.) But then Alex got “sick” (appendo-colo-reducto surgery, or whatever) and Frances seems to think the welfare of her unborn child is more important than apres ski. So Colin and I got recruited.

I said NO. Nope. Not going. Don’t want to. Can’t make me. Colin just nodded and looked at me with those big, sweet eyes. He tried to say “But–” and I just said “Nope.” I wasn’t going to be stuck in some ski town in plastic death boots with a bunch of crazy Italians and Germans.

But THEN, I remembered something: my New Year’s resolution. I had said it out loud to Colin.

“I am going to try to be more positive.”

I didn’t really notice my negativity until I met Colin. He is so cheerful. So upbeat. “Say, Colin. Want to (fill in the blank)?” — Want to flambe a goat? Search for the lost underworld of Atlantis? Stand on your hands and yodel?– “Sure,” he almost always says, without hemming or hawing. He is so easy going.

So, here was this ski trip. My mind was set negatively.

I was remembering that last ski trip, to Snow Creek in Weston, Missouri. Also affectionately known as “Ice Lump”. I fell, trying to snowplow, and hurt my knee. It hurt alot. I got bundled into the ski patrol sled and dragged, humiliated, down the lump. The girls I came with let me wait around, in the shed, while they skiied the afternoon away. Bitches.

So in contemplating ever skiing again, I shuddered. I didn’t want to risk certain death. In fact, I didn’t really want Colin to go either, to die flying over the edge of a mountain, leaving me a pathetic, childless widow. I guess I was scared.

But I told Colin, yes, I would go.

I changed my mind.

Being in Selva Gardena, in the Italian Alps, where they speak German and Italian and Laden, is like being surounded by a kind but very energetic (and very oddly dressed) alien race. Or maybe you have been asked to join a cult, something you don’t understand. You are thrown into lessons, and just left there, constantly battling your urge to RUN, although you feel safe, mostly happy, and the sun is shining.

There was goulash soup and gluhwein, the sun mercilessly warm in the cold air, reflecting off the snow. Fluid Italian overlapping with the gutteral sound of German while milk foams in the espresso machine. Tired legs thud forward in the hard plastic boats against the tiles. Chalets perch like birds nests above the roads, darkened timber balconies stark against whitewashed stucco walls. Up the side of the mountain, from this valley, dry, soft pine firs point to the sun, defying gravity, crawling out of the dirt and rock, to the sky. Caraway seeds in brown bread taste like licorice. A man wobbles in a one-piece mint and magenta snow suit, twitching his moustache. Above a bar, brown ceramic 1/2 litre wine jugs hang from hooks, the spouts and handles curved gently, the name of the restaurant hand-painted in blue: Keller Laurin, Selva Garden. Behind the guest house desk, piccolo bambino stands at his easel, jabbering in Italian and drawing with Crayola.

Helmets and goggles and poles and gloves and trousers and boards and earbands and snoods and shades and long underwear and lip balm and down coats and wool sweaters and sunscreen and hats and skis.

I spent alot of time on those slopes, falling. Poor Henry, such a gentleman. He stood next to me on Risaccia, not wanting to help too much, trying to help as much as I would let him. “Just point your skis this way and then put your hand that way, and it will be easier to get up.”

I looked up at him with daggers. I was on my bruised right hip for the fourth time down that slope, slowing myself the best way I knew how. “Please, Henry, please. Just leave me here (to die, I thought). I’ll get up eventually. PLEASE, just go. I’ll be fine.” My gloves were soaked. My knees were screaming. My calf muscles had seized up hours ago. My toes were solid ice. I was miserable. I sat there a while longer as people shooshed past. Then I pulled myself up and finished the slope, gliding down to the three, waiting for me patiently in the sunshine. 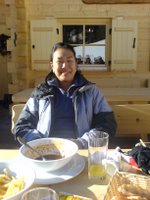 But each afternoon, at Bar La Stua, over gluhwein or weissbeir and reports of the day, I could feel the pull in my muscles. I looked back over the day and then forward out over the day tomorrow and thought: “Why not? So, yes. OK. Again. I’m here.”

Karen would smile and say how much I was improving; Henry would gently enquire how I thought it was going. And I would look at Colin, his sweet eyes and say, “Yes.”

“I’m going to sign up for another lesson. Order me another beer in a few minutes.” And I walked up the road, paid my 30 euro, and committed to another day of ski boots and frozen toes. 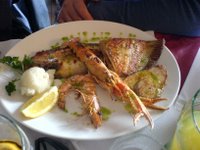 In saying yes, I faced steep slopes and terrifying chair lifts and humiliations galore as I scooted, skiless, down a red slope on my bum. But I also earned hours in the Italian sunshine, the fresh mountain air, watching scores of ecstatic people in their element. That beats lead skies and miserable faces on the Tube any day. I pushed myself and succeeded, conquering my fear, even if just a little bit.

Oh and the food was great too!