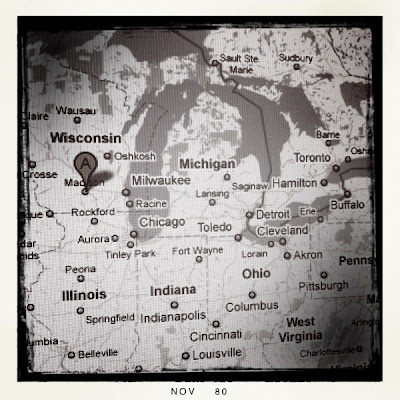 …And Other  Existential Observations on Home

My colleague (we both teach at university) said, quite innocently:

“I guess I don’t think of Wisconsin as the Midwest.”

This while I was rapping a heavy mix of Madison virtues and Midwest easiness.

“Oh,” she said when I called up the map. “I guess I thought it was over by Ohio and Pennsylvania.”

She said she wasn’t that great with “geography.”

Living on the East Coast is like being trapped in an episode of the Gilmore Girls.

Insanely intelligent-sounding people are constantly rattling in run-on sentences, fueled by tidal marshes of Dunkin Donuts coffee. They’ve got so much to say about staycations, community gardens, the humane treatment of turtles, and “red states,” they quite often ramble themselves into thoughtless places of emotionally conjugated human illogic.

Whenever I watch “The Gilmore Girls,” though, I can’t help but remember that Lorelei has never left Connecticut. She’s an expert on the trivia of pop culture, and can perfectly analyze a muffin without opening the bag. But could SHE find Wisconsin on an unlabeled map?

What I Mean To Say…

This is usually where people expect me to say that the Midwest is BETTER than everywhere else. I don’t mean that.

I will say that it surprises me that no matter where I go, people seem to be really glad to tell me how much better “HERE” is than someplace else. And usually that is followed by their complete lack of knowledge of that someplace else.

Personally, I love other places. I suppose my failing is not being able to love HERE enough, while I am living it.

3 comments for “Where Wisconsin Is…”