It isn’t possible that I have been more relaxed lately? How is that possible?

Colin and I went a-walkin’ again this weekend. It is getting warmer these days, so we are getting off our butts. This excursions took us west from our flat, generally in the direction of Notting Hill, though we really only made it as far as Bayswater.

To go west, unfortunately, you do have to find a way under the WESTWAY, the 700-lane motorway (it narrows to just one if you are driving on it). There are a few places to get under it, here and there. You just have to know where to be. 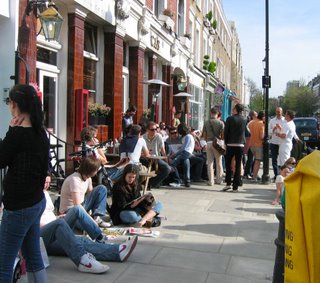 Saturday was outrageously gorgeous here: meaning it was almost 60 degrees and the sky was a milky blue. Having such weather coincide with a weekend day requires every human (between the ages of 16 and 68) to rush immediately to the nearest pub, buy a pint and drink it on the pavement out front, as seen here. Now Colin and I have come to see this as a rather charming part of the London lifestyle. However, when I arrived at work at the Warrington later that afternoon and there were (literally, not figuratively) 37 Corona bottles circling one lamppost, I thought it was a bit less precious. Londoners feel entitled to get smashed and leave their glasses on the curb (or “kerb” as they spell it here…) instead of taking it to the bar when they get another. Lazy, poncy bastards.

But it really was a great day to be outside. It was a great day to take a stroll. We found a lovely little square off noisy Porchester Road, and the moment you stepped inside, you felt tranquil. We had a snack and sat on a bench, gazed in awe at the gorgeous flowers. There are two things they do really well here in England, things I will miss when we leave it. One is flowers: with all the damp, temperate weather and the natives inability to hold a conversation with another person without insulting them, it’s no wonder their gardens look so good. The second thing is sausages. Colin tells me all the time “You’ll miss those sausages!!” And I will… mmmm… sausage…. 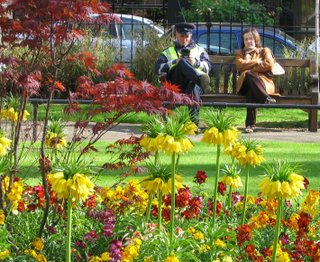 We strolled around the garden. A woman across from us was alone on a bench. Then she was, oddly, joined by a man in uniform. I said to Colin “Oooo! Rendezvous with a copper! How romantic!” But Colin shrewdly pointed out: “That’s no copper. That’s a parking warden.”

They didn’t hold hands. They didn’t look at each other. They spoke out of the sides of their mouths. I held up the camera to photograph the “flowers.” I wanted to see this transaction go down. After all, parking fines are serious business here: £50 at a minimum. What was she arranging? What dirty secrets was she tarnishing that lovely little square with. We’ll never know. 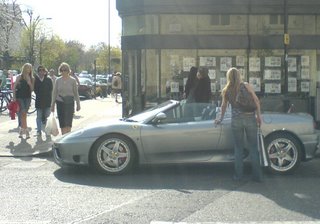 God, there is a lot of money in that area where we walked. Trust me, you have to HAVE as much money as Hugh Grant to live in Notting Hill, or just about, unless you live in council housing. No way that rangy flatmate of his could have afforded it (though that actor Rhys Ifans surely can now). It’s so hip, it hurts. But I love it, and I would live there if I could. Except that we can’t. There really is just no good place to park our OTHER Ferrari. 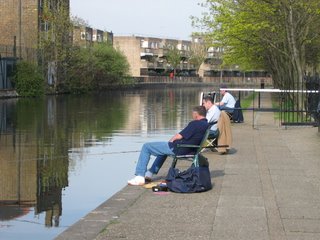 We walked back along the canal, preferring the dirty waterway to the noisy crush of traffic. A few guys were fishing in the canal. They looked pretty dejected. Now, my brother-in-law and sister, Jay and Mary, fish in the Mississippi, which is famous for being muddy, but I don’t think that kind of dirt is the same. The only current this waterway gets, generally, is the occasional garbage sledge or canal boat passing through, giving the water a little stir with its tiny motor. 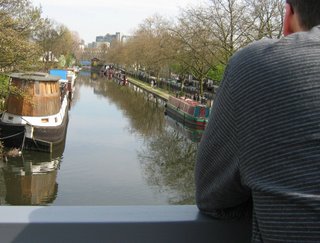 Still, the canal has its beauty spots, especially along the areas in Little Venice and Camden where all the boats are parked. People live on these low-riders, which don’t travel much more than a few miles an hour. We walked by standard boat, in fine shape, tied up just before this bridge. An older couple, probably retired, were lounging about. They had gorgeous little flower boxes on planted top of the rig and he had his lawn chair out, relaxing on towpath in the sun while she read the paper on the deck. They were listening to the footie match on the radio.

We were out for a couple of hours. Came home with just a loaf of bread. Colin fed me dinner before I had to go work at the pub. It was a good afternoon.

One thought on “A Walk ’round Bayswater”