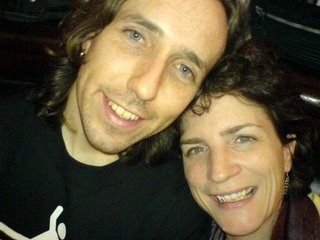 Why does that matter?

People leave London. They go to Spain. It happens all the time, and you’ll believe that most especially if you watch “A Place in the Sun” or “No Going Back” and the half dozen other copycat shows like it. Brits want out.

Chris is loud and demanding. He thinks war is acceptable and he argues with me about everything. He doesn’t watch movies, so he never EVER gets any of my movie references. He drinks way too much and refuses to eat when he drinks, thus often going for 24 hours without eating.

Why do we love the people we love? I think, sometimes, it’s our own reflection we see. It’s the only way to love ourselves.

Jeez, he laughs really hard and loud when I am funny (and I am VERY funny), and that makes me oh, so happy.

In another post, I mentioned that someone told me I should talk more about London, less about myself. Chris was furious about that when he read it! Why? Because Chris and I had had a HUGE argument about the content of my weblog many months before that. After he read that post he said “I told you to do that AGES ago, and yet you give the credit to some other bloke! That’s rubbish!”

Chris reads my blog regularly. He reads all of it. And he criticizes what I write, disagrees, pushes my buttons. He drives me bonkers. I love him.

So below is the copy of the original post that I wrote, back in December, after that conversation with Chris, I didn’t post it, because I didn’t finish it. That happens with a lot of things in my life—-it’s my worst failing. But Chris doesn’t have to worry about criticizing me about that (or the American spelling of “criticise”)…I beat myself up about it all the time.

By the way…I don’t write long posts like this anymore… Why? Because Chris said (suggested? recommended?) that I write things shorter.

“Chris says I should tell you more about London. I told him he should go jump in a lake.

“He said people back home want to know more about what life is like here, not about me baking cookies! I said, up until recently, life SUCKED here (yes, Mom, I used that word you hate) and I just couldn’t bear to talk about it. I didn’t want to tell anyone about anything because I felt so negative about it. Why disappoint them if, by any chance, they are living vicariously through me? Vicarious, I thought, sounds an awful lot like precarious.

“Chris and I argued about this quite loudly last night at smoky pub called The Chandos. It’s a good pub, right off of Trafalgar Square, around the corner from Covent Garden, and conveniently located two or three steps from the nave of St. Martin’s-in-the-Fields Church. After the Candlelight Concert, you can stumble in for a few.

“So I met Chris out last night, along with his sister and a few others. Colin was busy playing poker. (If you want to know more about that slice our life, you can read about it here.) He’d been reading a few of my recent posts and liked them. Do more of that! He said. Good god I hope I never have an editor like him.

“I think about how most American people react when I tell them I live in London. For the first year, I didn’t know what to say.

“Me: Do? uh, Nothing tangible?… Cry a lot. Sit in a funk of depression for six months. Smile at people who ignore you. Yell at my wonderful new husband, then apologize, then make up. Then beat myself up about it. Sit at home and watch the telly. Write all day. No, I HAVEN’T gotten published yet or found an agent yet.

“But lately, after the worst of the worst passed by, details some of you know and others don’t need, something has happened to me. And, you know, Chris is right— ugh. …I hate saying that.

“That’s Chris in the photo there next to me. Not a bad looking chap, for a Welsh-English type. He’s the little brother I never had. We met at The Passage, where I volunteer a couple days a week. I scrub pots and pans and serve tea, chop broccoli and fend off advances from manky-smelling men (and a few staff members), and, well, near as I can tell, Chris just runs around and talks a lot. And he gets paid. Most of time, he seems very stressed about all of it.

“And what fun it is to torment him.

“But lest you think I may be too hard on him, don’t worry. Chris isn’t the typical, soft-spoken English gent. He says things like:

I read your blog. I thought that baking thing was absolute rubbish. All that “I am making a cookie. Should I put a chocolate chip in?” Blah blah blah! It’s BORING. No one wants to hear that crap!

Yeah, well, I watched that movie – what was the name? the one you said was good – Lost in Translation. God, it was absolutely HORRIBLE! I mean, nothing happened! It’s just ‘Hey I think I’ll call my wife and swim some laps and eat sushi.’ I fell asleep halfway through it. It was crap.

“Look again at the photo, though. You’ll notice that I am grinning. Yeah, he wears me out and pushes my buttons, but I like Chris. Why? Maybe it’s my penchant for Muppets. Or maybe it is masochism. Or maybe I like him because he pushes me, all the time, to think about things differently.”

And that is all I wrote. I told you I never finish anything.

“They say Spain is pretty though I never knew…”