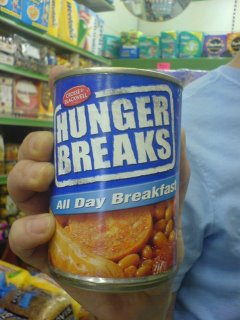 After Renee Zellweger made the first Bridget Jones movie, she was quoted in an interview as telling the world how much she liked beans on toast.

Recently, while picking up eggs and extra mature cheddar (the British love all kinds of cheddar– you can hardly find any cheese BUT cheddar in the grocery) at the local shop, Colin and I discovered this hearty little treat: Hunger Breaks All Day Breakfast.

I just have one question for you: what IS that round thing on the can label? Is it bacon? A tomato? A sausage patty? I just don’t know.

The can says it contains: Baked beans in tomato sauce with sausages, button mushrooms, chopped pork and egg nuggets with cereal, and bacon. So that poses another key question: what kind of cereal are we talkin’? Cap’n Crunch? Kellogg’s Post Toasties? Shreddies? It’s going to make a difference with the consistency and flavour.

Also, I’m kind of unclear in the “egg nugget” department. Button mushrooms I get… egg nuggets I just don’t have a visual on.

I’m still considering buying this, just to get Colin to eat and tell me what he thinks. I know he will like it: that’s what I’m afraid of. Apparently the good-morning-goodness can last all day.

Hunger Breaks can also be found in something called “Kebab Attack.” For photos and a review of THAT beauty, read here.

The company that makes this succulently-convenient tinned delight is Crosse & Blackwell. They were established in 1706 in Britain as a pickling and canning company. They are now owned by Premiere Foods. Apparently Hunger Breaks falls into their “convenience foods” category. Something like good ole Chef Boyardee.

They also have something called “The Full Monty,” “Bombay Balti Beans,” and another dinner delight: “Sausage ‘n’ Wedges.” They don’t specify what the “wedge” is. I think it might be a potato product. Also, you can get (see here the wide selection) something called the BIG BRUNCH: MEAT FREE! … perfect for those vegetarians out there looking for a handy convenience food.

One thought on “Full English Breakfast”