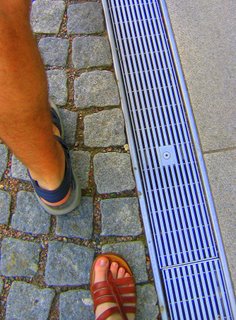 Nothing about former Attorney General John Ashcroft’s snarling smile, his closed mind, and his Patriot Act could make me proud to be an American.

Nothing about our President/Commander-in-chief waving on the side of an aircraft carrier could make me proud to be an American.

Nothing about the pathetic two-party system, or the state of our “democracy” could make me stand up in a foreign country and shout loudly that I am American.

But don’t worry. If people ask, I don’t lie and say I’m a “pseudo-Canadian” (married to one). I say “I’m from Iowa, but I live here now.” It turns their minds away from the big, socio-political wasteland between us and, I hope, reminds them that we are all coming from home, and trying to make ourselves at home someplace else.

Still, in the last two years, in my absence from the United States, I have defended my country, verbally, more than most Americans will in their lifetime. And it has made me realize: I am a patriot. A real patriot, that no “Act” will ever define or defy.

I don’t need to wear a flag T-shirt or drive a Chevy to prove it. Want to know one way to find out how American you really are?

Try standing behind the bar in an English pub and answering these questions, once or twice a night, sometimes more.

“You aren’t American, are you?”

“You sound so intelligent. Are you Canadian?”

“Where are you from?… Iowa? Is that the good part of America or the bad part?”

“Is Iowa near Montana?”

“Why don’t Americans have passports?”

“Why do Americans eat so much?”

“What kind of accent is that? You don’t sound like any kind of American I’ve ever heard on TV.”

Not all the questions are this inane. Some of them are direct questions of political relevance, like why Rumsfeld made a particular offensive decision in Iraq, or do I think Hillary will get elected, or why Bush said something offensive to Mexican immigrants again.

Of course, since most of you know me well, you know that I don’t, for a second, back down or let any comment like this slide. I don’t get tipped at the pub, so there isn’t a lot of extra incentive to be overly nice. I am, of course, polite and I joke around, but I call them out on it.

Questions I ask back:

“Oh. Wow. So you’ve travelled alot? Where have you been in America? (common answers: NYC and Florida, or “I haven’t been there.”

“Have you studied U.S. political science?”

“Do you know that Iowa and Montana are about as close together as London and Moscow?”

“Do you know that Iowa and England are the same size, in square miles?”

“I haven’t talked to Rumsfeld/Hillary/Bush today, but when they check in later this evening, I’ll be sure to ask.”

“As many Americans have passports as British do.”

“Have you seen the size of the portions of fish and chips lately?”

It is easy to get lulled into the idea that the United States is great, the best place in the world, especially on a day like today. The U.S. isn’t the best… of course. it’s just different. For most of you reading this, it’s your home, and home is where the heart is, as they say.

Right now I live in a country that is OLD. It’s been around. It’s seen empire come and go. It’s stood through thousands of years of invaders and language shifts and settlers and immigrants. It’s been around the block. In just the last century, it’s been bombed so badly that it had to evacuate all of its children from London to strangers in the countryside. Those children included my father-in-law.

The U.S. is young, big and brash, a teenager who knows it knows everything. But it is beautiful and complex, too. It is naïve and it is learning it’s lessons. Over time, just like Great Britain, it will see how much it didn’t know, and how many lives—- human, animal and plant —-that were lost as a result of too much confidence or too little thought. Meanwhile, too, there is so much fun and joy, being a big kid on the playground, playing with the best toys, and being full of joie de vivre, as the French call it: joy of life.

I love my country and its people, but I see my reflection in my new neighbors too. I love England and all its battlescars and imperial wounds. It holds its history in the palm of its hand and never crushes it. My hometeam squashes yesterday like a bug under a heel. Which is worse? Neither. As Michael Stipe says, “Everybody hurts sometimes.”

So, now I am a patriot of the world, and of home. Home is Iowa, home is the United States. But home is also the place where I live. I have respect for that, and I love the people who let me stay, no matter how ignorant they may be of my beginnings.

We are all ignorant. That, it seems, is that hardest thing to learn.

3 thoughts on “How Britain Made Me a Patriot”