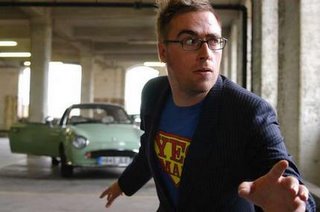 I had the nicest e-mail recently from Danny Wallace… the only personal note I have ever received from a king, I must say!

After I wrote that last post, I thought it would only be fair to let Danny know I had written it. I am a Joinee and a Lovely citizen afterall… It is good and fair thing to do. So I sent him and e-mail with a link to this weblog, thanking him for stopping to pose for the photo and letting him know I’d written a little bit about him . Here’s his swell response:

Thanks for the e-mail. I was a little surprised by some of the comments in your blog, though. You make it sound as if ‘power’ has changed me! Well, you’ll be pleased to hear that I have no actual power. The Leicester Square event was rife with irony and tongue-in-cheek self-importance – it was for the final episode of what had been a series full of the-joke-being-on-me, and so the final scenes are a counter to that and a feelgood end where we finally meet the citizens. There certainly was no sense of ‘moving up the totem pole’, as evidenced by how I talked to people and how they talked to me between takes! I went to the pub afterwards to hang out with as many people as I could and thank them. If you’re going to be a King, and you’re me, you’re partly playing a character. I think most people do pick up on that and I’m genuinely sorry you didn’t. I’ll try harder next time!

Hope you’re well, and that you enjoyed Jon Stewart. Sorry I seemed surprised and nervous – I was chatting to an old friend I hadn’t seen in ages when you came up, so my head was elsewhere!

Too bad more leaders of largish nations aren’t equally as pleasant and generous! I am reading Danny’s latest book, Yes Man and I can tell you, being pleasant, positive and open-minded — his latest experiment — can have its up side. I am going to try it more! Just say NO to negativity and meanness and cold-hearted snakes. Say yes to funny guys in mint green cars, women with PEACE GEESE flyers, and homeless folks selling The Big Issue!

Have a lovely day.

P.S. Don’t forget to do good deeds on Fridays!