Colin and I were out Sunday evening to see Jon Stewart in a live performance at the Prince Edward to promote his book, America the Book.

You know, I’ve been moaning and complaining lately because I never meet anyone famous around here. Madonna and Gwyneth and Kate all live practically on my doorstep — so does Jude — but do I ever run into them? Nope! Why are they avoiding me? Sure, I saw Tom Hanks, but lunging toward him with my camera, along with 4,000 others, cordoned off in Leicester Square at the Polar Express premiere isn’t quite what I was imagining. If you pay THIS MUCH to live in London, it should come with free, accidental celebrity meetings included. 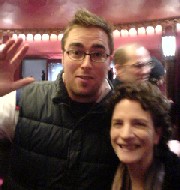 So, as I mentioned, Colin and I were out Sunday night in Soho. We were in the queue to pick up our tickets when I spot a familiar head in line ahead of me. I backhanded Colin on the chest (poor Colin’s chest… I did the same thing when we spotted Louis Walsh two feet away from us on Maida Vale Road. Maybe it’s better for him if we don’t see famous people. I might collapse a lung.) Hey! I whispered loudly, turning my back to the famous spiky-haired guy, DANNY WALLACE is right in front of me!

Of coures he wasn’t right in front of me; Colin was. But fortunately, Colin is a spatial mathematician with Elizabeth-to-English translation capability.

There are two oddly odd things about this scenario: 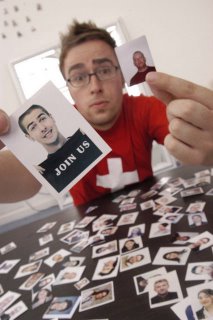 Danny Wallace has a picture of me. It’s in a drawer or a box somewhere, with lots of other pictures (see proof at left). He knows that my laptop got drowned in uber-storm last autumn. He even expressed sympathy about it in an email to me. He lives along a train track in Bow, and though I have never been to his flat, I have seen inside of it. I saw it on TV. I guess he must live in the cruddy part of East London by choice, because he certainly, by now, could afford better.

For the Anglo-Amero-pop-culture savvy, Danny is Dave Gorman’s other-half. (Now, don’t get all homophobic on me… they were just roommates. ) Gorman made himself most famous for his Googlewhack adventure.

Danny, not to be outdone, formed a cult — by accident. He wrote a book about it called Join Me. It was exceptionally funny, and suddenly, in reading it, more people joined his cult (or “collective”, as he prefers to call it). I read it and I joined. Colin read it, and he joined. The book made Danny a semi-recognizable person in London (Mostly in this way: “Hey that guy looks familiar, woman thinks while sitting on train. Where do I know him from? Is he the guy who delivers sandwiches to the office?). Danny connected with his collective by e-mail and website. It created a group of groupies for him. They got together sometimes, at Hyde Park and at pubs across the Anglo-land. Sometimes Danny came, sometimes he left the Joinees to fend for themselves. Together, though, they were all working to do good deeds. On Fridays.

So what’s so oddly odd about that? Nothing. Read the book. Buy the book and have some laughs. Pass it on. It’s great fun and will make you want to join. It has pictures! What, I think, was odd was Danny’s next “boy project” (as he and Gorman refer to them). He created a country and made himself a King. King Danny of Lovely. A real, honest-to-goodness micronation.

Colin and I watched the show about the making of this nation on BBC2 this autumn. We even recorded it on DVR and ate dinner by it. My friend, Chris, was following it too. He mosied by the unveiling of the country’s name, held in Leicester Square and reported back some ominous news. It wasn’t good.

Let me tell you it is an odd thing to watch this spunky, cute-in-a-dopey-way, writerly guy suddenly worshipped by a bunch of people who saw him on TV. While the concept of “Lovely” — just like the concept of “Join Me” — was founded on genuine altruism and whimsy, I watched in discomfort as the nation building, along with poor Danny, got tainted by exposure and power: the power of media, the power of position, the disconnect between him and his people, and the temptation to buy into the trappings that are tied to government hierarchy: Saville-Row tailored uniform included. His uniform as leader of Join Me? A big black parka and ratty blue jeans. The book, Join Me, helped to preserve a sense of mystery and harmlessness around Danny. All that fell away with Lovely.

So, in a way, when I touched Danny on the arm at the Prince Edward to say hello, to introduce myself after all this time, I was hoping it would be like it might have been in the Joinee days: fellow comrades on a mission to bring niceness to the world. I had high hopes: after all he was wearing a section of a parka, even if the sleeves were missing. But I knew it was too late. Danny had moved up the totem pole: once a real leader — The Leader of Join Me, asking people to buy presents and cups of tea for the unsuspecting — he was now KING (and TV star), wearing designer rags and ordering his citizens to Be Good. What a difference a uniform makes.

I have a lot of sympathy for people made famous, even when they have their own hand in it. It is impossible to realize how slowly the subtleties of life are stripped away. Even the small joys begin to crumble, like meeting someone new. Poor Danny; he might never get to know a person without them already feeling like they know his story, like they’ve got his number. And, he might never know what he missed, passing up the chance to have coffee with me.

Oh, I should mention: Danny was very nice when I introduced myself (if surprised and slightly nervous). I, apparently, was insanely happy to meet him. But you can see that in the photo. Maybe he had reason to be nervous.