OR, for real danger, now you’ll have to go to Mt. Etna

It rains in London a lot. Sometimes it just mists, or mizzles, or drizzles. Other days it showers, teems, pours, tips down. In any case, it rains. As a result, quite often, the pavement is wet. It can just be foggy one early morning, and the streets are covered with a thick moistness, a sheen not unlike the one on my husband’s face the morning after a night drinking tequila with Tim, Peter, and Frances.

Maybe that’s why they finally did away with the good old London bus, the Routemaster. Maybe a certain percentage of the 10 percent of handicapped Londoners who cannot use them were, in fact, made unwhole in an attempt to snatch the back end of the old number 38. One slippery-eel afternoon.

But where is the fun in that?! One of the best reasons to escape the United States is escaping the chains of the legal system. It’s impossible to do anything anymore in the States without ridiculous restrictions. For example, for fear of liability, public golf courses all over the nation took water coolers off their courses last summer. One cooler was contaminated, one guy died… suffer the golfers with heat stroke.

One summer, 1999, my brother Mike and I climbed up Mt. Etna in Sicily with T. Mallie. No guides, no ropes, no warning signs. Was there lava? YES! Was there sulphurous fumes? You bet! How about steaming hot air shooting up through holes in the ground? Mike had scald marks on his feet to prove it!

Ah olde Europe… the land of “Sure, climb the active volcano if you want.” No handrails in the 11th century castle walls, no mulch along the crumbling, pock-marked forest path. No waivers. Just have at it, in that laissez-faire mindset. Live and let live– or live and let hapless tourist fall off cliff. Whatever the case may be. It is a lovely, relaxed way to see the world. 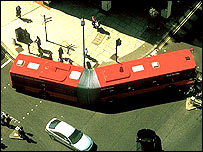 Now, the Routemaster is retired, replaced by the horrific bendy-bus-of-death. I suppose the danger is still there, of a new kind. No more leaping on and off moving buses down Piccadilly or Charing Cross. Instead, death may come just standing on the curb, innocently waiting to be run over by the back end, cycling alongside it, or like Ottawa, Ontario residents, waiting for the first snowfall.

So bye-bye Routemaster. Now there’s something scarier in town.