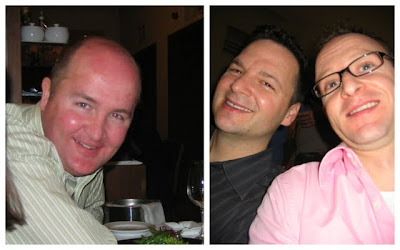 Here’s a brief version of the story of how I met Tim and Peter… I’m thinking about them today.

I was working at the Warrington Hotel in London, which isn’t a hotel, but an epic pub in Maida Vale. Now owned by Gordon Ramsay.

It was autumn of 2004, and we’d only just arrived in London. I was still an ignoramus of British culture. I had no idea I shouldn’t be friendly to the people I was slinging drinks to. American cretin I was. I hadn’t read Kate Fox’s ultimately useful anthropolgy “Watching the English” from where I learned, eventually, that my job was to take money, pour beer without head exactly to the top of the glass, and agree/complain about the weather. Full stop.

So, I was discombobulated while working at the pub.

Smiling was NOT working, and neither was small talk.

Being American (during the Bush second term, natch) was full on FAIL.

Additionally, I had an extremely efficient yet apparently-annoying habit of making two or three customers’ drinks at the same time… a standard practice in American bars, but a practice that was the highest level of rudeness to the British highly-developed sense of queuing. To the untrained eye, it APPEARED to be a mob of people swarming around the 30 foot bar, all staring at me with 10 pound notes in their fingers. But every sweating man with loosened tie there knew which one of them arrived first, second, third, and so on. Harrumphing commenced if I accidentally turned my back while making a Pimms and soda and served someone out of order.

So, me and my acid-yellow bar shirt were having a rollicking evening one Friday when a handsome, smiling face ordered two pints of lager.

Smiling? Hmmm.. Ahhh,yes. The accent. Decidedly NOT British. His partner hovered behind him. Handsome too. Too handsome to be British too. Gay and not cranky Brits! OK!

In Which I Make My Move

During the “pick up the glasses and empty ashtrays” portion of the evening, I found the boys again at their table. Fearlessly, I plonked myself down, undoubtedly savagely regarding the weather as “just fine and why is everybody complaining?” ha HAH! Even though blinded by the glare of my shirt, Tim and Peter were undoubtedly rendered helpless by my wit!

And that was the beginning of my — and soon, Colin’s  —  love affair with Tim and Peter. We adored dinner and drinking time with them, visited them in their country “estate” when they moved out of Maida Vale. We hottubbed and shared Indian food (not at the same time… eww-yyuck); grocery shopped (Peter elevates to an art form) and once watched in gleeful horror as an over-served man tumbled head over keester while leaning on a table that wasn’t there.

We shared our Thanks-mas-Hanukkah-Kwanz-Giving dinners with them and other friends.

I even accidentally flashed them at their wedding, certainly sealing their gay marital bonds even more securely.

Well, now Tim and Peter live FAR away in Singapore, and even with technology like Facebook and Skype, there are some distance and circumstances that can’t compensate for the snuggle-lovely warmth of close-friendship maintained over beer-soaked marble.

One thought on “Singapore Sweethearts”