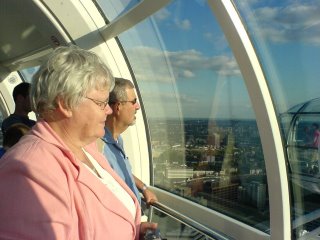 My in-laws, Henry and Linda, have descended upon us in London. Henry is a proper old limey, having been born here. Still, things are somewhat different since the World War II days, so I’ve been taking them around the town. Here we flying high in the London Eye… The weather has been spot on and even too hot, much to Linda’s dismay, as she didn’t pack for hot weather. Who would? It was 85 here on Saturday. 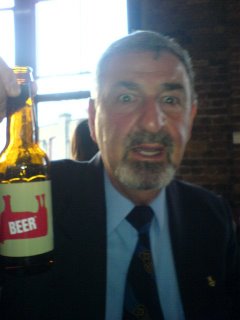 We had a big night planned for them Friday night after they arrived, a surprise, though Henry guessed it, naturally as he’s been keeping up with my blogs. We went to dinner at Smith’s of Smithfields (seen here, where Henry tried the local beer) and then to the Tower of London to meet our friend, the Yeoman Warder Robin Miller, for a quick VIP tour and the Ceremony of Keys, followed by socializing at the Yeoman Warder’s club with Robin and his wife, Heather. It was great, and a good excuse to dress up. Too bad you can’t take Henry anywhere. 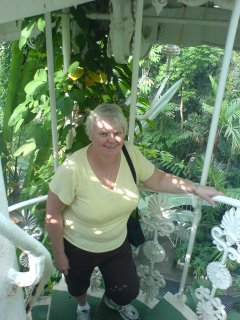 In an attempt to wear out my tireless guests, I took them to Kew Gardens, South of the Thames. This is the Royal Botanical Gardens that is nothing at all like a park or a greenhouse. It is HUGE, acres and acres of land, with about 12 enormous green house, an orangery, cafe, shops, a palace, etc. They even have an “Explorer” train similar to the conveyances they use to get you from your car to to the gate at Disney World. But we had none of that.

I am trying to convince H&L that this is actually a weight-loss regime for all of us. We walked all over that afternoon, and even did the stairs in the steaming hot tropical humidity of the Palm House. Linda smiled through it all, of course, though as the Kew has that effect on people, especially on a sunny day. Then it was on to the enforced walk to Richmond along the Thames, where we spotted crane and dodged cyclists on our brisk mile and quarter hike. It all ended well with a cheeky half-pint at The Prince’s Head on Richmond Green. 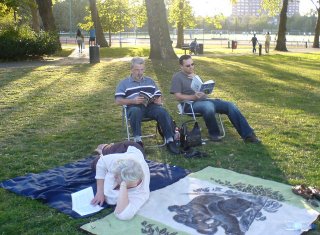 On the weekend, when Colin was around, he took them on a rousing tour of the inside of their eyelids, the inside of their books, and the park in our own neighborhood, Paddington Recreation Ground. I guess Colin has some sympathy for his parents and figured they needed a day off from my regiment to rest and take in the diversions of people watching and local cricket matches. Anyway, the weather was perfect for lounging around in the shade with nothing to do, something you can’t always say in London.

More to report in days to come.

One thought on “The Parental Invasion”