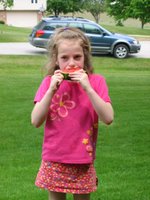 I recently had my first proxy visitor to London. She came in the post.

Here name was “Flat Stacey” and she was a friend of my niece Grace.

Grace is one of many school kids involved in the Flat Stanley project. It’s an international literacy and communications project based on a kids book about a boy who is squashed by a bulletin board.

Well, I was all for this. Combine the darker side of children’s literature with screwball ways to get kids to study cultural geography?!? I am in!

So here are a few of the highlights of Flat Stacey’s trip to London. Sure we saw Big Ben and Westminster Abbey, but living in London is also about meeting and living with people of every color, race, religion, political viewpoint and odor you can imagine.

Flat Stacey went with me to visit the Passage, a soup kitchen where I volunteer near Victoria station. Most of the volunteers are women who “don’t work” according to many of the staff members and clients (most of the clients are men.) However, the female volunteers are primarily nuns, or women who are retired from raising their children. Some, like me, have flexible work lives. We also have many students who come here during their school breaks. And there are lots of German nannies who use their days off to volunteer. Some of the women who volunteer are in their 80s and carry tray after tray of dirty dishes back and forth. They are tough old Irish gals!

These two guys are clients from the Passage who Stacey met outside the Cathedral. They are Eastern European, I think probably Polish, recently emigrated to London. Since the EU welcomed the Eastern bloc to its group, thousands of immigrants have flooded England. They are looking for work and a better life. Many British people are angry about this (just as many Americans get angry about Latino immigrants), but as members of the EU, they have rights to live and work here.

Stacey met John, a black taxi driver, outside Westminster Abbey. John and Aunt Elizabeth had a great conversation about Londoners and “America.” The English call the U.S. “America”, not the States or the U.S. John wanted to know why Elizabeth lived here. She gets that question alot from English people, especially those who have been to the States. Even though they don’t like American politics much over here, many Brits long to escape their own country. They like “America,” particularly New York, which is usually the one of the few places they have travelled to in the States. John said he’d been to New York and he liked it alot. He been to Florida too, but it was too hot for him. Elizabeth told him she liked New York too, but that it wasn’t very typical of America.

Stacey was walking around Parliament and spotted something going on, so she went to investigate. This is Brian Haw, England’s most famous peace protestor. He has been at this site, outside Parliament, since June 2, 2001. He initially was protesting sanctions against Iraq, but expanded that protest after 9/11. The Home Office has been suing to have him removed. You can read more about him on his website here.

Stacey got to see this new memorial for women who contributed during WWII. It was placed in Whitehall (near Number 10 Downing Street) just 200 yards from the Cenotaph, the memorial that commemorates those killed in war since World War I. This memorial was installed last July, nine months after the memorial for “Animals in War” was unveiled in Hyde Park. The memorial shows the many uniforms the women wore during the campaign but does not feature any women.

Stacey learned how to get around on public transportation during her stay. Elizabeth and Colin don’t have a car, because in London, you don’t need one! There is always a Tube, or a bus, or, if need be, a taxi to get you where you need to go. Oh, and the best mode of transportation: your legs! Colin uses his to fuel his bicycle to work and they both walk everywhere! Visitors from the States are often surprised at how quickly they “get in shape” after being here a few days: with a combination of long walks and expensive food, it’s easy to drop a few pounds!

The best thing about public transport (besides helping the environment and saving money)? The view! Skipping a ride on the Tube and riding in the front seat of the double-decker bus instead, Stacey discovered, was the best way to see London. You can see the architectural details of the buildings, the leaves and the birds in the trees. And, at night when it is dark, you roll alongside other buses, all lit up from within, and see other people just like you, floating in the air.

OK, time to get outside! The sun is shining and Stacey wants to see the Thames!

One thought on “The World Should Be Flat”