This Guest Post is by author and Zen Buddhist Karen Maezen Miller.
I asked her to write her after meeting her via Twitter and seeing a kind of  half-hidden beauty and bare truth in her writing.

I am traveling across country today. Not quite across the country, but in a hopscotch route over five states in six hours with a breakneck plane change to deliver me from Los Angeles to Kansas City at the lowest price I still can’t afford.

The first leg of the flight took off late, and to the indignities inflicted – sweltering slow lines, humorless scowls, foul air and bare feet – I fear the worst will be yet come. The peanuts they are about to hand out won’t compensate, but I’ll take them. I’ll take them the way we take everything these days: in defeat. 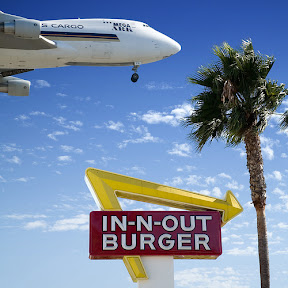 This is how far we’ve fallen.

I used to know a man who flew frequently and strictly first class. This was in the days of first class. Like the man himself, his style of comportment seems now to have belonged to the lost age of American elegance.

He was highly placed in an industry that produced a reputable, durable and glamorous product: the automobile. He worked alongside icons of American ingenuity and leadership. His fine suits adorned. His silvery hair crowned. His shoes were supple and unscuffed. He appeared in all ways to have arrived at an invincible upper echelon.

Among his innumerable successes, he bragged of one thing: he had kept his weight within two pounds of what he had weighed when he graduated from Harvard Business School 30 years earlier. He lived in an Ivy League world, to be sure, so privilege itself wasn’t his point. The point was how you conveyed it.

He attributed his trim bearing to one rigor: he never ate airplane food. Given the hours he spent flying, this amounted to a significant restriction in caloric mediocrity.

I knew him well enough to see that his stylings camouflaged one weakness – a limp. Childhood polio had left one leg laggardly. He compensated for the half-skip with buoyant self-assurance.

We’re on the last leg of our trip now, having passed through a desert hub thick with delayed and dislocated travelers.

Flights late, passengers torpid, everyone glued to their chairs and devices. They eat pizza and chili dogs, frozen yogurt and French fries, because there is no more airplane food.

There is no elegance, no invincibility, no buoyant self-assurance. Across this country, we are falling, falling, and there is only the sad shame of our undisguised limp.

Karen Maezen Miller is a Zen Buddhist priest and the author of two books, Momma Zen and Hand Wash Cold: Care Instructions for an Ordinary Life.  She blogs regularly on her website, www.karenmaezenmiller.com, and for the Huffington Post.