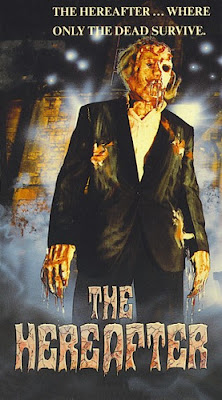 I don’t know if there’s an afterlife or not, but I want to tell you a story about it, and it’s not an easy story for me to tell.

A few years ago I became very ill. It started slowly, with some aching knees in the afternoon and evolving into hobbling around with a cane like an old lady.

My husband had to help me get dressed in the morning because I couldn’t lift my arms up without excruciating pain.

It was terrible. I had gone from a young woman who held a full time job, was a full time student on the Dean’s List, and who still had time to raise a child and play the guitar now and then, to an old woman who could barely get out of bed.

I saw doctors and psychologists,. No one could figure out what was wrong with me. I resorted to my own online research. Of course, that only made it worse. I worried constantly

Up until that point, I had never really considered the fact that I may get old one day. That parts of me would stop working. That I could get cancer or some other awful disease. That  I would DIE!

I mean, I knew I was going to die at some point, but until I came down with this mysterious illness, I didn’t really internalize that idea.

The human body (that’s you and me) isn”t built to last much longer than 80 years. A few lucky folks might live past the century mark and hear their names spoken on the morning news. But even though we all know we’re not here forever, we usually don’t stop to think about what that means.

When I finally paused to consider it, I was filled with an amazing anxiety.

What comes after this?

I’ve pretty much heard it all, and it all made me very upset. There is no proof. There is no good argument for any of these explanations. There’s only speculation. Is that what the future is? Pure speculation?

Don’t worry, readers. This anxiety didn’t last long. I attributed some of it to the winter season’s lack of sunshine.

One day, I woke up with my feet in so much pain I couldn’t bare the thought of them touching the floor. So, I lay in bed concentrating on my feet. Eventually, the pain subsided, and I concentrated on placing them on the floor. Then, I focused only on using my feet to carry me to the other room. That was the morning I realized the importance of focusing on the here, not the hereafter.

I had been using so much energy worrying about what would happen when I died that I didn’t stop to realize that I wasn’t dead yet. I had no idea when I even would die. It could have been the next day, or it could be sixty years from now. In the meantime, I forgot that I was still alive.

After that, I started to focus on my life while I was still here. I can’t really know what’s going to happen after I die. I just have to live the best life I can and hope for the best.  I decided to stop worrying so much about the future. I didn’t know how long I was going to be sick for. It could have been for the rest of my life. I had to plan accordingly, which meant less planning.

Life and the afterlife are huge ideas, and I didn’t have much energy to worry about those things.

I’m not saying I don’t make plans for the future. I do. I just put more effort into enjoying the moments and less into what might happen. It’s not an easy, considering the variables. But what’s the point of dwelling on the afterlife, or even the afternoon, when it’s so far away?

I don’t claim to be perfect. I still have anxiety sometimes, but at least now I have an action plan.

As for my illness, I eventually was told that it’s Fibromyalgia. So, yes, I’ll be sick for the rest of my life, but at least now I can walk around and dress myself. I’m not going to die! Well, I am, but not for quite some time. Meanwhile, I’ll just live the best life I can, maybe help others to do the same. Moment by moment.

I reckon if there is an afterlife, I’ll find out when I get there.

2 thoughts on “Choosing Here, or the Hereafter”