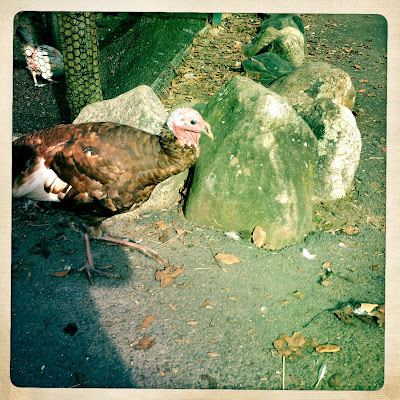 I stopped by Nick and Heather’s house yesterday to drop off a tablespoon of bourbon for a truffle recipe Nick was making. I asked Nick what he made for his family Thanksgiving.

“I made this delicious farro recipe. Want to try it?”

It wasn’t until a depressing day in 1994 sitting on the steps of The Vanderbilt in KC with my friend Stephen Koff that I had my first real food breakthrough.

Steve wanted to cheer me up and so took me out for my first ever bowl of hot and sour soup. Tofu. Bean sprouts. Black mushrooms and sheer terror.

That day I started to change my mind about food.

Outside the boundaries of pizza crust there was a huge universe of foods I never tried — food I didn’t know or understand. Food I had no idea could change how I felt about myself, AND how my body made me feel, and live, and think.

I got a spoonful of Nick’s farro dish — with carrots, onions, cranberries and other good stuff — and it was lovely crunchy perfection. Nick said he wanted to make it because the Thanksgiving dinner usually doesn’t have any grain at it (brilliant) and as I enjoyed the crunchy texture of the dish, cold from the fridge, I thought how far I’d come from a girl who used to gag on lettuce.

At our house, Colin cooks up a traditional dinner with the taters, stuffing, and turkey and gravy from drippings and it was delicious. You’d think this would be the sort of dish Elizabeth would go for, but I admit, the Thanksgiving dinner is not my thing. Colin is CRAZY about turkey day, but I could give it a pass. To me, the dinner of Thanksgiving is too bland, too salty and just plain designed for filling, and not for enjoying the taste.

Since my eating evolution, I have fallen in love with flavor. Ginger, peanuts, lemongrass, cilantro, vinegars, strong cheeses, hot hot sauce, sautéed onion and garlic. On our trip to Trinidad a few years ago, our host, Violet served us white fish and flatbread for breakfast with hot sauce. Other days we went for street food and had doubles, which has one of my now-favorite ingredients, chick peas.

Nope. I am no longer a slave to Tombstone Pizza. I love food that has lots of strong and complex flavors, mixes salty, acid and sweet. All of my taste buds want to participate in the food.

One of my biggest problems with the food of my childhood: soft, overcooked, and monochromatic in flavor.  I didn’t know what I didn’t like about the food back then. Now, though, I know what food I don’t want: meatloaf, turkey, dry/white meat chicken, and potatoes, seasoned with salt and pepper.

The best thing I can say about the food is regardless of the flavor, the food was (for the most part) homemade, from the hands of my mom, and sometimes dad.

One feeling about food that stays with me is the fear that I would always eat the way I did as a child. My dad said not to worry. He was picky as a kid too, and he eats everything now, even canned spinach! I heard him, but I am not sure I believed him.

Thinking about all the eating that goes on during this long weekend, one thing I realize: We are truly what we eat. But we aren’t stuck with the eating habits we think we have.

Our kids, just three years ago, only ate fast food dunked in ketchup. Now they eat everything including fresh fish, lentils, and salad. With a fork and knife. They dunk artisan bread in balsamic vinegar and olive oil.

They eat this way because we do. Because I do. Because eating habits aren’t really habits. They are just a passing idea of who we think we are, written as if in chalk on the pavement.